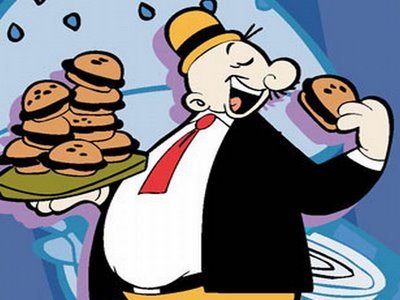 We all know Simpsons and we all love them. This hilarious animated sitcom has been continuously entertaining us for the past two decades. It tells the story of Simpson’s family from Springdale and their hilarious life experiences. The funniest among the lot is the patriarch of the family, Homer Simpson. His character has all the essentials of providing fun. He is crude, bald overweight, incompetent, clumsy, lazy, a heavy drinker, and ignorant, however he is essentially a decent man and very much devoted to his family. He is renowned for his love for food. He loves to eat and his trademark food is donuts.  His catchphrase “mmm…donuts” is said at least once in each episode. His donut craze goes the next level in a particular episode where guest star Stephen Hawking telling Homer, “Your theory of a donut shaped universe is intriguing, I may have to steal it”.

Popeye is an iconic character which every one of us idolized during our childhood. Our favorite one eyed sailor with bulging forehands settled the connection between spinach and strength. In most stories, Popeye finds himself in a difficult situation usually beaten up by the bad guys (especially by Bluto). That is when he eats his can of spinach, which provides him super human strength to fight off the villains and save the day. He usually crushes the can, oozing the spinach directly into his mouth or sometimes through his pipe.  The impact of Popeye on the audience was so much that, it increased the American consumption of spinach by a third. The spinach growing communities of Crystal City, Texas and Alma, Arkansas has erected the statue of Popeye in recognition of the characters positive effects on the spinach industry.

While Popeye is craving for spinach for extra strength, his sidekick, J. Wellington Wimpy commonly referred as Wimpy is obsessed with hamburgers. In most of Popeye cartoons, it seems as though his entire existence revolves around scheming to eat his next burger. However he is usually doesn’t have the money to pay for them and he usually attempts to trick fellow diners into buying his meal for him. His best catchphrase “I will gladly pay you Tuesday for a Hamburger today” became very famous and is still used in modern comedies and is often referred to illustrate financial irresponsibility.

Jughead Jones from the Archie comic series is the ultimate idol of every foodie. He could eat massive amounts of food without gaining any weight, thanks to his freakish high metabolism.  He is a typical over eater and can down burgers, pizzas, candies and anything at an astounding rate. He also has an in depth knowledge about food as he can recognize every food from its smell and his taste buds can detect the slightest flaws in prepared food. He is the best friend of Archie and unlike Archie has very little interest in girls, often saying “I find food to be a better companion”. Despite his lazy attitude and unhealthy eating habits, he is very athletic, clever and witty. Although he loves each and every food, he has particular craving for burgers.

We all know Garfield. He is fat, lazy, pessimistic, sarcastic and loves breaking things. But what he loves the most in this world is lasagnas, give him a tray and he forgets everything else. This Monday –hating cat is so obsessed with lasagnas that he describes them as the ‘nature’s finest food’. Apart from lasagnas, he loves pizzas, which would not be surprise as he was born in an Italian restaurant. Originally created with the intentions to “come up with a good, marketable character”, Garfield has spawned merchandise earning $750 million to $1 billion annually and has nearly 17 million fans on Facebook.

There are plenty more popular characters that can be easily associated with food like Bugs Bunny and carrot, Winnie the Pooh and honey, Ninja Turtles and pizzas. All these characters and their food also have a huge impact on the audience as well, especially kids. After all, if our favorite character likes a particular food, chances are that we will also start liking those.

Visit the Sforzesco Castle in Milan – How to Get There