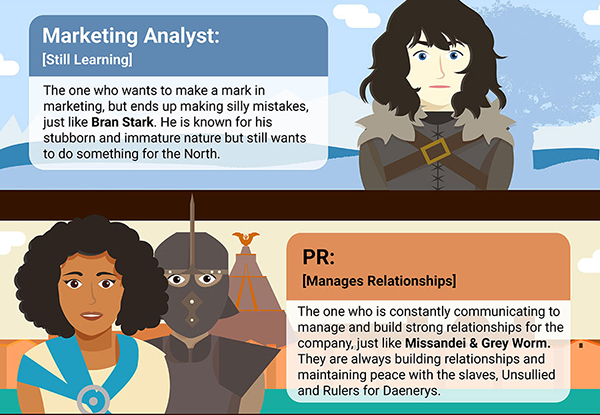 The Game of Thrones season must have ended but the excitement is still running high for all the fanatics. All the fans are eagerly waiting to see who is going to sit on the Iron Throne. Or keeping the recent events in focus, who is going to dethrone the current Queen. There is so much happening in the show all-time that I can’t help and compare the show’s plotline with the current digital marketing scenario.

This is the one team that is always on its toes and tries to get everything done, but is still faced with sudden surprises. One day the SEO ranking is awesome and the next day everything just drops dead because of some new Google update. Just like what happened with Margaery Tyrell. She was ruling the King’s Landing and seven kingdoms, suddenly the bomb dropped (oh wait, it was the Wild Fire) and everything came crashing down.

This ain’t the only thing. There are many similarities like this between GoT and marketing which I tried to identify and explain in this infographic. However, I’m discussing the similarities between the GoT characters and marketing roles more than the situations.

Though many situations matches each other as well like how Khal Drogo found his downfall soon after he found Daenerys (she did try to save him but in vain). This is similar to a marketing aspect where cold calling completely stopped as soon as drip email campaign was introduced in the process.

So you do notice the similarities between the show and marketing. This gets more interesting when you see the comparison between the characters and digital marketing roles. Let’s just get down to the infographic then.