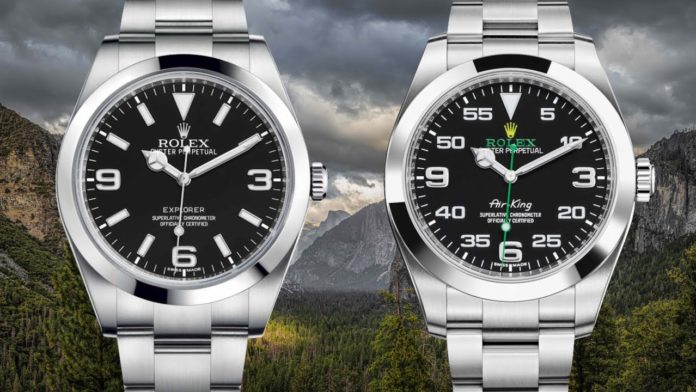 Negosentro.com | Rolex Air-King: The King Amongst The Air Watches | Rolex is one of the brands that do not require an introduction. Rolex, in itself, is already the introduction it needs. The name associated with luxury and quality. It is the forerunner as a watch manufacturer. They produce approximately 2,000 and more watches every day and generate a massive amount of sales per year. Rolex introduced many watches over the last decades. But let us delve into the Rolex Air King collection, which first came to be during WWII. It is the most durable among the Air models.

The first Air-King model is a rare item. Its creamy face and Arabic numbers provide a unique touch and make it a collector’s piece to have for. In 1953, Rolex introduced a watch with a silver dial and distinctive thin hour hands that would, later on, represent the Air King Family for the years to come.

Air King is an old watch model for Rolex that is continuously in production. As a way to recognize the British Royal Air force pilots wearing the Oyster watches while in wartime, Hans Wilsdorf, Rolex founder, produced the Oyster Air watches. It was in 1945 that Air King made its debut. It started by being a simple stainless steel watch with an Oyster case, smooth bezel, and a time-only dial.

These two models were the earliest references that are not automatic. They ran on a hand-wound Caliber 10.5 movement. Later on, Air King ref 6552 came to be. Hence, equipped with the self-winding Caliber, this reference had an Oyster Perpetual Air-King on its dial. In Rolex dialect, Oyster means the case is waterproof, and Perpetual refers to the automatic movement. These 6552 models include the signature Air King script still present in the Air King models today. Later on, 6552 got overtaken by a newer model, the Air-King 5500.

It was in 1957 that Rolex introduced the Air King 5500. This model has a 34mm stainless steel case with a domed steel bezel and has a steel Oyster bracelet. Inside it is an automatic movement. The Air-King 5500 has Precision on its dial run on a Caliber 1520, while those with Super Precision run on Caliber 1530. The difference is due to import restrictions on the jewel counts.

Best-known being a time-only Rolex, Rolex produced a few Air King Date models. In the mid-1970s, Air King ref 5520 came, joining the line-up of gold-capped watches. By 1989, Rolex returned to its fundamentals and stopped producing the two-tone, gold, date, and the more considerable variations to Air King. This same year, Rolex created the Air King 14000 and Air King 14010.

With stainless steel 34mm Oyster cases, the Air-King ref 14000 and Air King ref 14010 are almost identical. Differentiating the two, 14000 has a smooth steel bezel, and the 14010 possesses an engine-turned steel bezel. With the introduction of these two watches, there are a few noticeable updates to the Ari King line-up.

One of the new updates to note is the sapphire crystals and Caliber 3000.

Rolex released Air King ref 114200. Thus, replacing the previous five-digit reference with this six-digit model. Yet Rolex maintained its silhouette of a 34mm steel Oyster case. The 114200 has a smooth bezel. However, the accompanying models do not possess the same smooth bezel. Additionally, 114200 features an engine-turned bezel. Furthermore, 114200 has a COSC certification making this model the first in the collections to have this certification even though they are running on Caliber 3130.

Moving forwards to 2016, Rolex once again began production of the Air-King collection with a new style. The new line is different from the previous designs. Releasing the Air King 116900, Rolex upped its features by giving it a larger case and a distinctive dial style. The case is 40mm larger than the previous 34mm dimension of the first releases.

Additionally, the last Air King models displayed various colors for the dial, providing you with more options for color references. But 116900 has one color variation available. Moreover, this watch runs on Caliber 3131 and has a power reserve that can last for 48 hours.

The Rolex brand is distinctive. Its fame reached worldwide. It is not surprising, though, as the watches possess excellent quality and style that will best suit your needs in this modern era. These watches are perfect gifts for all occasions. You have many selections to choose from that are surely worth every penny you spend for it.

Patek Philippe Watches That Keep The Tradition In The Modern Era

What are Pre-Med course works and key requirements for Caribbean med schools?

Forex Trading for Beginners: What You Should Know