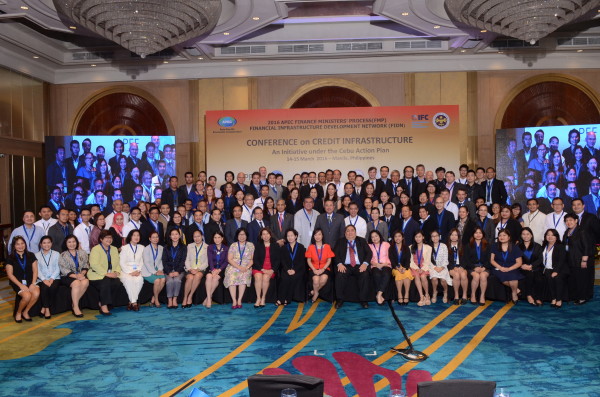 The Philippines has partnered with Peru, host economy of this year’s Asia Pacific Economic Cooperation (APEC) meetings, in improving credit access in the Asia Pacific by sharing knowledge and experience in implementing best practices in an international workshop it is hosting.

The ‘Conference on Credit Infrastructure’ was held on March 14-15 at Dusit Thani in Makati and was organized under the Financial Infrastructure Development Network (FIDN) initiative of the APEC Cebu Action Plan (CAP), developed during the Philippines’ APEC chairmanship in 2015.

Finance Secretary Cesar Purisima remarked, “Peru, in its chairmanship this year of the APEC Finance Ministers’ Process, has committed to driving implementation of the Cebu Action Plan’s initiative. Financial inclusion being one of the priorities in their agenda, I promised the full support of the Philippines in advancing progress on this area.

This workshop continues our pursuit of expanding opportunity to the small and the vulnerable. Building a formidable credit infrastructure for the region ought to bring inclusive finance to the fore of our sustainable growth strategy.”

SEC Chair Teresita Herbosa said, “Achieving an enabling environment for credit accessibility for all – including the smallest of borrowers and the marginalized — is a process that entails close collaboration among different stakeholders. This workshop reflects the serious desire among APEC member economies, the private sector, and development partners to post concrete gains in the area of credit infrastructure within Asia-Pacific.”

FIDN, launched in November 2015, is a multi-sectoral network that seeks to support APEC economies in undertaking financial infrastructure reforms.

It is composed of APEC member economies; International Finance Corp., a member of the World Bank Group; the APEC Business Advisory Council (ABAC); the SME Finance Forum; and the Organisation for Economic Co-operation and Development (OECD).

“Improving access to finance for MSMEs is a core objective of IFC’s credit infrastructure development program,” said Yuan (Jane) Xu, IFC Philippines country manager. “In the Philippines, there is a good momentum among key stakeholders to pursue the reforms further to improve the country’s credit reporting system, secured transactions framework and movable asset finance market. We will continue to support the Philippines on these important reforms.”

CAP is a finance-related development road map for the Asia-Pacific that was drafted by the Philippines in collaboration with other APEC member economies, and was formally adopted during the APEC Finance Ministers’ Meeting held in Mactan, Cebu in September 2015.

Throughout 2015 APEC finance-related meetings and at the FIDN Launch, a common understanding of the key reform areas of credit information and secured transactions systems was established among the APEC stakeholders, including member economies, government agencies, and international organizations. The challenge that needs to be addressed next is to continuously advocate for the reform, and get the reform underway.

At the conference, Philippine government agencies have presented their respective actions toward implementation of financial inclusion reform and accessibility of credit before an audience coming from other APEC member economies.

By sharing its own policy and implementation experiences, the Philippines hopes to continue the momentum of efforts toward better credit access in Asia-Pacific.  While a significant number of Filipinos do not have access to credit and other financial services, the Philippines is recognized as having one of the best regulatory environments in the world to enable financial inclusion.

They have presented regulatory enhancements pursued by their respective agencies, among other measures, to improve the access of micro, small, and medium enterprises (MSMEs) and other underserved sectors to funding.

Besides speakers from the Philippine government, senior executives from IFC, World Bank, ABAC, USAID, Policy and Economic Research Council (PERC), ACCRA Law, GE Capital, and other financial and economic organizations also shared their expertise in the area of credit.

Also, representatives from the Philippine business sector, including those connected with SMEs, shared their insights on the subject of credit access. The experiences they shared in the workshop will serve as valuable inputs in policymaking by APEC member economies.

The March conference is the first of two workshops that will be organized under the FIDN (the schedule of the second will be announced soon) on financial infrastructure.

How to Plan the Perfect Work Christmas Party

September 24, 2020
Negosentro.com |  Open Up Your Living Room with Bi-Fold Doors | The residence of a person depends on their moods. The house is a...