The conference will have as its theme “BNI Better Together: Positively Impacting Business Communities,” which reflects the goals of BNI Philippine to assist local business communities in getting back on the road to full recovery as quickly as possible.

Visit their website at  www.bniphevents.com or contact Rox at bnisupport.events1@bni.ph or at the mobile number 09688537119 to find out how you may take part in this event of world-class caliber, which will be attended by people from all over the world. 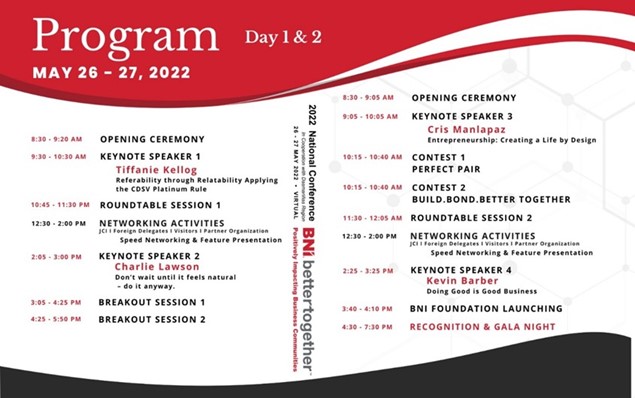 Regional, national, and worldwide BNI employees provide the training, structure, and technology that BNI Members need to sustain their success in their respective regions.

Ivan Misner, Ph.D., is the CEO and founder of the company.

Dr. Ivan Misner started BNI, the biggest business networking group in the world, and is also its Chief Visionary Officer. Since it began in 1985, the organization has grown to have more than 9,800 chapters on every inhabited continent. Just last year, BNI helped its members get almost 12.3 million referrals, which led to $16.7 billion in business.

The University of Southern California is where Dr. Misner got his Ph.D. He has written 26 books, one of which, Who’s in Your Room?, is one of the best-selling books in the New York Times. He also writes a column for Entrepreneur.com and has been a college professor and a member of the University of La Verne’s Board of Trustees.

Forbes and CNN have both called Dr. Misner the “Father of Modern Networking.” He is considered one of the world’s top experts on business networking and has been a keynote speaker for major corporations and associations all over the world. He has been written about in the L.A. Times, the Wall Street Journal, and the New York Times. He has also been on CNN, the BBC, and NBC’s Today Show.

He has won a lot of awards, including “Humanitarian of the Year” from the Red Cross and the John C. Maxwell Leadership Award. He is happy that he and his late wife, Elisabeth, started the BNI Charitable Foundation together. After raising their three children happily, they also became “empty nesters.” Oh, and in his spare time, he is a black belt in karate and does magic tricks.