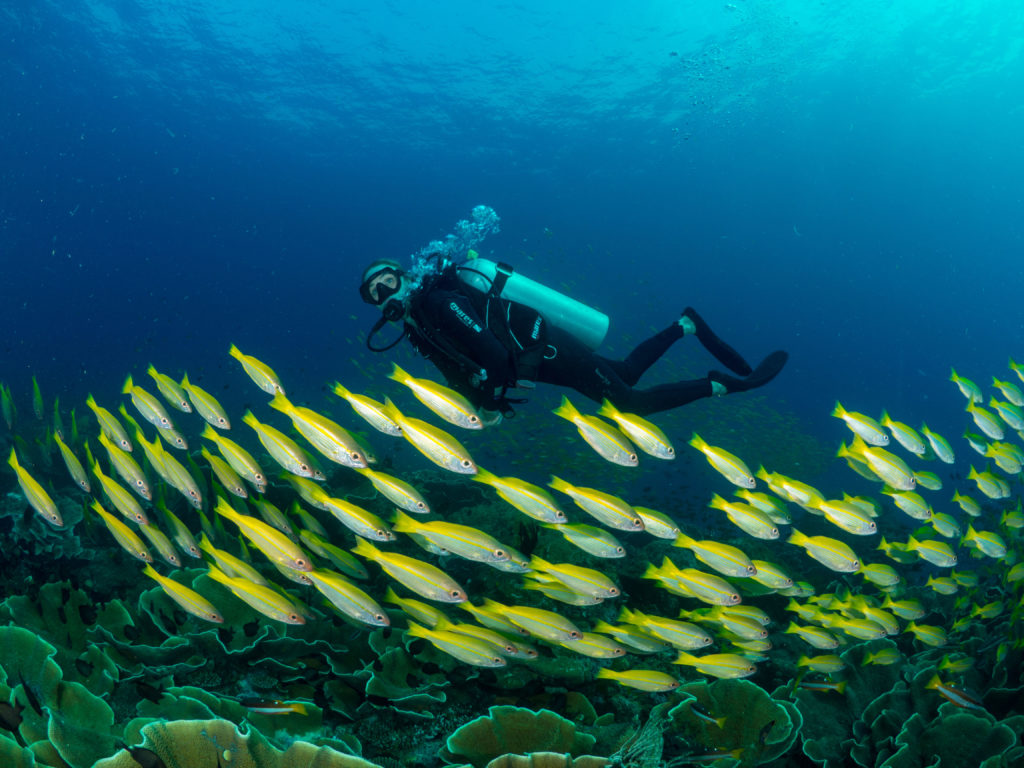 Oceana senior advisor Alexandra Cousteau wrapped up her two-week tour with a diving trip to El Nido in Palawan, which she described as a “world-class” destination worthy of protection.

Cousteau, granddaughter of renowned undersea explorer Jacques Cousteau, visited the Philippines from Aug. 29 to Sept. 11 to promote awareness on sustainable fisheries management and the global fight against illegal fishing practices.

“When you think about the world that my grandfather started scuba diving in 70 years ago, it was a world that didn’t know what was under the surface of the ocean. As we’ve learned more about the oceans in the past 70 years than ever before, we’ve also lost more of the oceans,” she told a media forum on her last day in the country.

She urged Filipinos to conserve the country’s marine bounty, after seeing their beauty during her diving trips. “I just saw Palawan and El Nido with my own eyes, and it is world-class,” she said.

At the Apo island in Negros Oriental, she swam with sea turtles in the marine sanctuary that has become a model for protected area management. In the tourist town of Moalboal in Cebu, Cousteau got a glimpse of the sardine shoal that provides livelihood for fishers. She was treated to dance numbers showing the fragility of the oceans by young pupils, whom she exhorted to be vigilant in conserving their resources to ensure food security in the future.

Speaking before students at the Silliman University in Dumaguete and at the University of Cebu, she focused on the role of the oceans for human survival. “The ocean is part of our lives. It gives us food, transportation, oxygen – all critical reasons to save it,” she stressed.

Cousteau showed a film of her grandfather that showed how marine resources are fast disappearing due to over exploitation and destructive fishing.

“What brings us together is the opportunity to restore abundance and diversity in the oceans,” she said. “It is not just about sea turtles, dolphins and the whales and corals, but it’s also about restoring resources that support people especially the poorest of the poor. There’s an opportunity to protect communities from typhoons and in creating livelihood for sustainability and tourism.”

In Manila, Cousteau met with Vice President Leni Robredo and legislators including Senators Cynthia Villar, Risa Hontiveros, Miguel Zubiri, and Juan Edgardo Angara, as well as Rep. Pia Cayetano. They expressed interest in Oceana’s campaigns as embodied in the slogan “Save the oceans, Feed the world” and vowed to help craft programs and laws that would promote wise use of marine resources.

Cousteau had a meeting with Environment Secretary Regina Lopez, who promised not to grant any permits that would destroy the deep-sea reefs in Benham Rise and the coastal and marine habitats.

Cousteau also met with Drusila Esther Bayate, assistant director for technical services of the Bureau of Fisheries and Aquatic Resources, a vital partner of Oceana and fishing communities in law enforcement efforts.

“We are extremely honored to host Alexandra on her first visit to our country,” said lawyer Gloria Estenzo Ramos, Vice President for Oceana in the Philippines. “She has tremendosuly helped  in highlighting our  overarching goal to restore fisheries abundance in the country, increasing citizen awareness on the compelling need to act and protect our oceans and in securing commitments from key decision makers,” Ramos added.

12 Inspirational Cancer Books to Educate and Empower You