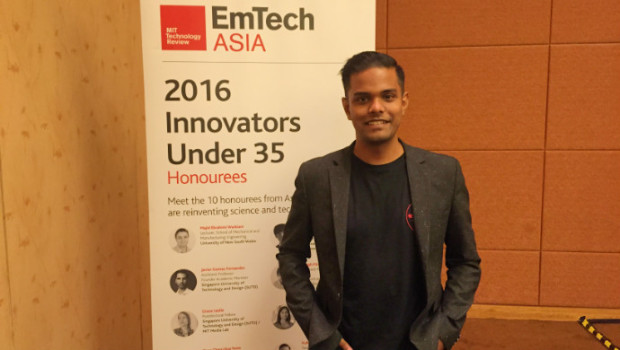 On April 13th 2016, Norway’s Prime Minister was hosted in Singapore by Norway’s leading multinational company DNV GL. The PM unveiled -The Hive – a fully autonomous drone docking station developed by SwarmX, a one year old startup. Pulkit Jaiswal the 23-year old CEO of SwarmX who I interviewed over Skype as part of my coverage of the global event for tech startups Rise, was understandably elated at the development.

Pulkit with two other co-Founders created SwarmX in April 2015. Prior to that, he spent three years building Garuda Robotics along with two other Founders. SwarmX came into being soon after he quit Garuda.

Pulkit is a prodigal young man who dropped out of Stanford to where he relocated from Singapore for study in an atmosphere of innovation. Too restless to complete a formal education, Pulkit at twenty years of age started Garuda Robotics.

And now within a year of starting SwarmX, he has succeeded in not just building an innovative industrial drone system but has convinced a global multinational to enter into a global business partnership with his firm. He has already secured two rounds of funding and is close to securing a third round.

DNV GL plans to bundle the SwarmX product with its integrated smart operations offering. They plan to take this to their wind and solar farms clients worldwide. This platform will help improve productivity, increase overall efficiency and help reduce operation cost of solar farm customers of DNV GL.

The SwarmX product is composed of two parts — a piece of hardware called The Hive — and its integrated application the Hive Mind. Together they constitute the SwarmX drone asset monitoring platform.

Solar panels require to be periodically checked for defects from overheating. The overheated panels show reduced performance. The defective panels are replaced. Work teams are traditionally deployed to periodically physically check each panel in a solar farm. A scaffolding is erected around a panel set to enable inspection. This is a cumbersome, time consuming process. The inspection work could take weeks to complete in a large solar farm.

With the help of SwarmX drone swarms like this can be accomplished in a day. Each drone set is composed of a drone with a mounted infrared camera. The vehicle is launched from an autonomous portable platform called The Hive box.  A drone can stay in the air for up to forty five minutes.

Integrated into the Hive box is the Hive Mind application. The application directs the drone, on completion of its task, to a precision docking onto the Hive Box docking platform. In situ the drone battery is autonomously recharged. Data captured during the flight is uploaded onto a secure private cloud. The recharging and data download work is concluded in forty five minutes.

How Business Travel Is Likely to Change in the Future

Your First Scale-Up as a Startup: A Guide