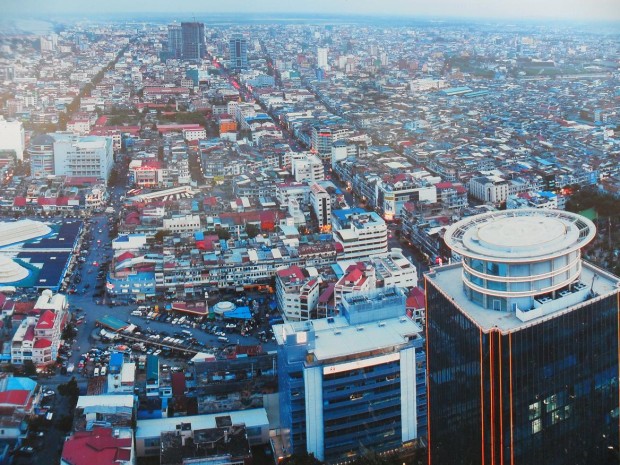 Phnom Penh in 2016 is a bustling metropolitan city once again, long since recovered from its years of civil war – and the capital and central business area of Cambodia. Though beautifully crafted since it was established, the city today is a far cry from what it was twenty years ago when trees outnumbered buildings.

Once again rising to its old nickname, the Pearl of Asia, Phnom Penh is now filled with an eclectic mix of architecture moulded from the French colonial era, traditional Khmer style homes and temples, and a huge new supply of high rise buildings that clearly show the merging of two significant time periods; a colorful mix of the old and the new. A construction boom is occurring across the nation, and fast redefining urban centers such as Phnom Penh. In 2015, construction and real estate represented 2 percent of the total GDP growth of the nation, out of the 7.1 total growth in GDP last year, according to the World Bank Cambodia.

Phnom Penh has a reputation with locals and expats alike as a land of opportunity – causing one of the fastest rates of urban spatial expansion in Southeast Asia to occur in the city last year, according to real estate consultancy Knight Frank Cambodia.

Phnom Penh boasts hundreds of local and international outlets and stores, and food spots and bars that can be enjoyed by everyone living or visiting Phnom Penh. This makes it an attractive area for Cambodians who are seeking employment and expats travelling from other countries who do not wish to stray from the lifestyle that they’ve grown accustomed to.

And since it’s a fast-paced community, Phnom Penh allows expats the comforts and conveniences that they often are unwilling to sacrifice while they’re away from their own homes. It offers a sense of familiarity they wouldn’t otherwise find in other emerging markets.  Many properties in Phnom Penh such as the booming serviced apartments sector even offer in-house amenities like rooftop pools and gyms. The utilities in the city of Phnom Penh are nothing short of sophisticated as well. Sewage systems have been improved and there are far less power shortages in the city than previous years.

But perhaps the most attractive attribute of Phnom Penh is its wide selection of job opportunities for skilled locals and expats that have been strengthened due to the efforts of thousands of active NGOs, international business ventures and a fast developing local business scene.

Even more exciting for foreign investors and nationals is the equally busy nightlife of Phnom Penh, which specifically caters to expats living in or visiting the city for an indefinite amount of time. It offers a wide variety of themed bars that will surely give anyone a good time after a hard day’s work. These are also good places to hang out with your local counterparts and colleagues and enjoy traditional fare. The old idea that expats would sacrifice their quality of life in Cambodia is fast becoming outmoded.

Probably one of the biggest things that are enticing for foreign investors though is the wide selection of properties available for purchase and for rent in the market, with appreciation trends far stronger than other regional options. Thanks to the passing of foreign ownership laws in 2010, foreigners can enter the Cambodian real estate market and buy condos and office space above the first floor on strata title rights.

But before you make a move to Phnom Penh, make sure that you read up on news and developments from trusted real estate portals and don’t be afraid to ask local agents and agencies for assistance when selecting the right property for you.

5 Countries In West Asia To Visit After The Pandemic

Why Traveling Is Good For You