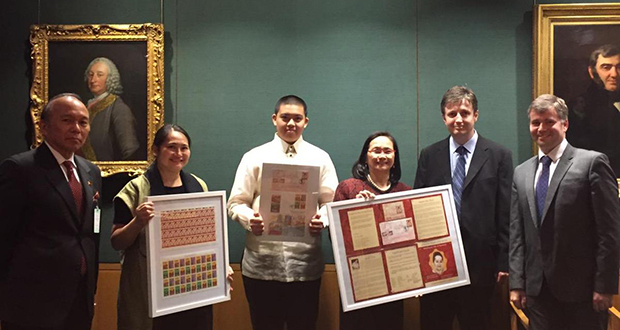 Descendants of Philippine food icon, Teresita “Mama Sita” Reyes have donated British Library has received a set of cookbooks and commemorative stamps from , according to the Philippine Embassy in London as reported to the Department of Foreign Affairs.

Mrs. Clara Lapus, President of Mama Sita Foundation, together with her daughter Joyce Lapus Sandoval and grandson Carlos Fidel Sandoval presented the donations to the British Library in London. The said donations were accepted on behalf of the Library by Dr. William Frame, Head of Modern Archives & Manuscripts, and Mr. Richard Morel, Curator of the Philatelic Collections, in the presence of Chargé d’Affaires Gilberto Asuque and other Philippine Embassy officials.

The Mama Sita’s donations are an appropriate addition to the rich collections of the Library considering the Filipino food company has captured the Filipino taste and has served as a model for Filipino entrepreneurs for its business acumen. – Chargé d’Affaires Gilberto Asuque

In accepting the donation, Dr Frame expressed appreciation to Mama Sita’s for the cookbooks and the commemorative stamps which are now part of the Library collections.

Prior to the formal turnover of donations, the British Library curatorial team showed the Philippine delegation samples of their collections which included, among others, Noli Me Tangere, an 18th century English-Maguindanao vocabulary, old maps of Manila, rare postage stamps and banknotes.

The donation to the British Library was initiated by the Mama Sita Foundation and the Philippine Embassy in London as part of the celebration of the 70th year of establishment of diplomatic relations between the Philippines and the UK.

June 11, 2020
Negosentro.com | Groundbreaking Technologies Used by Rubbish Removal Companies in Australia | Today, you can use technology for almost everything, including...

Bitcoin on the exchange. Start trading

June 5, 2020
Negosentro.com | Bitcoin on the exchange. Start trading | 2017 year. The information space is full of news about the adventures of...