Amazon with affiliate partner iPrice shares their exclusive first screenshots of its homepage and product page. Test reviewers said Amazon.ph was the best thing that happened to them since the invention of the smartphone.

MANILA –Apr. 1, 2017– Today, Amazon with exclusive affiliate partner iPrice Philippines premieres the first screenshots of the all new and exciting online shopping platform: Amazon.ph. Slated to be launched late 2017, millions of local and international products will be made available to Filipinos with same-day delivery service throughout the nation.  Maintaining the ethos of Amazon, the new e-commerce platform in the Philippines will be guided by four principles: customer obsession rather than competitor focus, passion for invention, commitment to operational excellence, and long-term thinking.

Partnering Amazon in this new endeavor is iPrice, a meta-search website in seven major countries in Southeast Asia as Amazon’s prime affiliate partner. With similar values and vision for ecommerce in Southeast Asia, iPrice’s partnership with Amazon will empower the Seattle based company with the needed marketing channels to aggressively market its products and services to the competitive ecommerce sector.

Further details of Amazon’s affiliate partnership with iPrice will be revealed at the annual AWS Summit on 20th of April 2017 at the Marriott Hotel Grand Ballroom in Manila. Here is an exclusive screenshot of Amazon.ph. 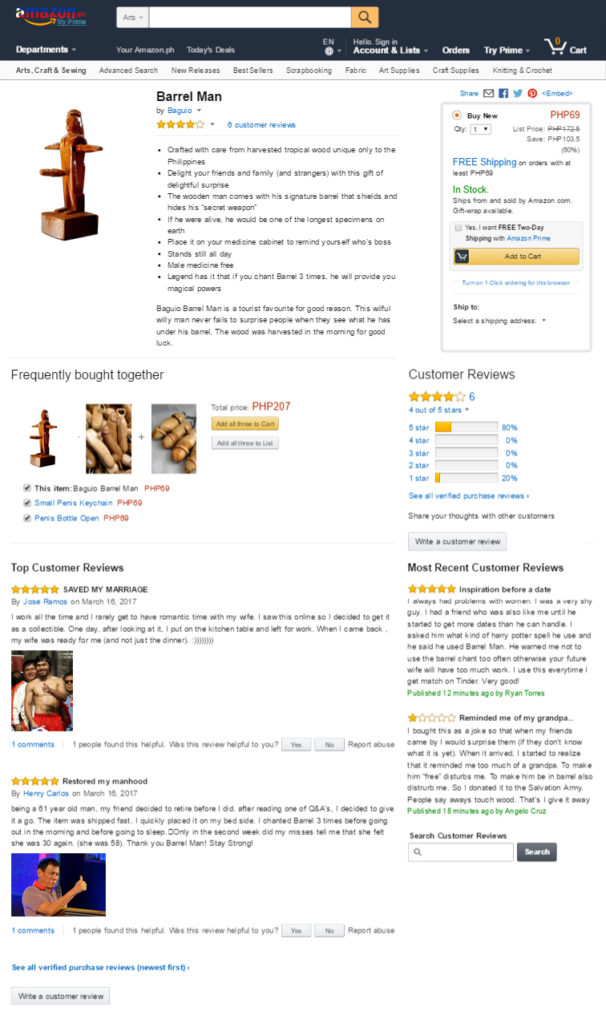 Often seen as the souvenir of choice of most travelers, the Barrel Man offers more than just it’s barrel. Handcrafted from tropical wood unique only to the Philippines, the Barrel Man is a figure that is built of quality material and has the magical powers suited to relieve men of their physiological and psychological barriers.

Amazon.ph and the Baguio Barrel Man was reviewed by test audiences prior to launch. It assisted in saving a marriage, and restoring one’s manhood.

The official press release will be released on April 1st 2017 here.

Amazon has revealed exclusive screenshots ahead of its launch in other major countries in Southeast Asia. Visit the sites below to view the official press releases:

*All product names, pictures, logos, and brands are property of their respective owners

iPrice Group is Southeast Asia’s leading Meta-Search platform, connecting consumers with hundreds of e-commerce merchants through a great shopping experience. Since October 2014, the platform has established itself as the fastest growing in its segment across seven markets: Singapore, Malaysia, Indonesia, Vietnam, Thailand, Philippines and Hong Kong.

Homerun Nievera is the publisher of Negosentro.com and WorldExecutivesDigest.com. He has interests in several tech and digital businesses as director and chief strategist.

Homerun is a digital evangelist, content marketer and lifelong learning advocate. Homerun is the “He Said” in the popular Facebook Page He Said, She Said.

Best Ways You Can Accept Payments: If You Are Starting Business in 2021