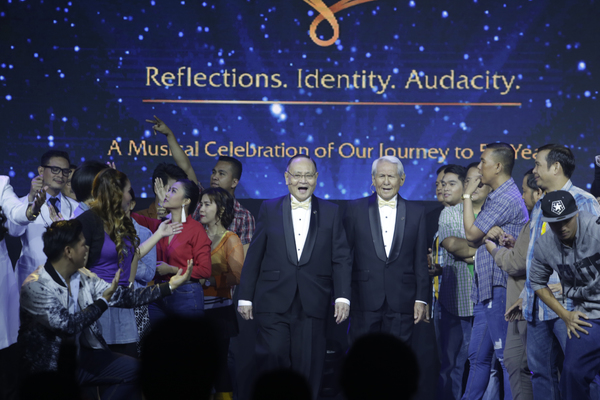 Fifty years ago, TMC began with a vision of service, enlivened by the patients to whom it was committed, the health professional community from which it sprang, and the nation through which it found purpose. And amidst the twists and turns of the ensuing five decades, that vision has remained TMC’s True North.

A series of activities were held starting January this year leading up to two grand events to celebrate this important milestone for the TMC community. Early this year, TMC staged a talent search, unveiling of the TMC Golden Perspective, ARAB Cup, and Golden Moment with the Chairman of the Board, Dr. Augusto P. Sarmiento, among others.

All these activities have been guided by the three words that served as celebratory themes of TMC’s golden anniversary – Reflections, Identity and Audacity.

The first part of the celebration was held on October 14 at the Grand Ballroom of Marriott Hotel. It was a special homegrown musical titled “TMC Golden Journey” featuring TMC’s very own talented doctors and staff. The musical was divided into decades starting with the 60s until 2010s, each depicting the highlights and milestones TMC had in the said era.

The program started with the invocation led by Jay Bengzon, TMC Vice President for Marketing. TMC Chairman of the Board Dr. Augusto P. Sarmiento gave the opening remarks and introduction to the In Memoriam, in honor of TMC’s dearly departed friends, colleagues, and partners.

In October 1967, ABM Sison Hospital began operations and only two years after it opened its doors, the hospital was on the brink of bankruptcy. Being a 93-bed hospital, it was just not economically viable.

The solution that was formulated was groundbreaking for the times. Leaders from the medical and business professions would combine to create a revolutionary model of governance rather than conflict. Under the leadership of the late Augusto M. Barcelon, an acknowledged leader in the banking industry in the country, as Chairman and Dr. Augusto P. Sarmiento as President and CEO, operations were streamlined, costs were rationalized and internal morale was boosted. Dr. Sarmiento is currently the Chairman of the Board of TMC. Soon, the hospital managed to raise enough funds to expand capacity to 293 beds.

In 1975, the hospital was renamed The Medical City, yet it remained focused on delivering excellent patient service through professional medical leadership and innovative management practice. The Medical City continued to grow steadily.

In 1996, TMC pioneered the establishment of outpatient clinics in strategic locations within and outside Metro Manila – concrete proof of the hospital’s commitment to make high quality healthcare accessible to its growing customer base.

As the first to be launched, the Antipolo Clinic remained an “only child” for three years while TMC tested and perfected its approaches to clinic organization and operation.

In June 2004, the hospital opened in its new location, a 1.5 hectare lot along Ortigas Avenue. However, TMC was not satisfied with merely an aesthetic makeover. Alongside the construction of the new site, TMC established flagship programs in which it aimed to develop primacy. These were the Regenerative Medicine, Wellness, Cardiovascular, and Cancer Centers.

Merely two years after its transfer to its Ortigas home, TMC submitted itself to the rigorous review and accreditation process of the Joint Commission International (JCI), the most prestigious accrediting body for health care organizations. With the JCIA’s gold seal, each person who comes to The Medical City is assured of receiving healthcare services that are at par with the best hospitals in the world. TMC was again accredited by JCI in 2009, 2012 and 2015.

TMC then embarked on developing a network that extends the reach and broadens the brand of The Medical City. In 2010, TMC made much headway in this regard, as it pursued groundbreaking initiatives nationally and internationally.

The Medical City Pangasinan, the latest addition to the TMC network, unveiled its plans for the renovation and expansion of the hospital in December 2015, providing the pubic a glimpse of the future of world-class healthcare in the region. TMC Pangasinan, formerly known as University of Pangasinan Medical Center (UPMC), is a Category 3 (Tertiary) hospital with a 70-bed capacity and 50 doctor’s clinics.

“My dear Medical City family of Co-Dreamers, the journey ahead for our beloved organization lies before all of us.  As in the past 50 years, this journey will surely be full of blessings, triumphs and gifts.  Certainly, there will also be a fair share of challenges and adversities – for after all, anything of worth, like our beloved Medical City, is always purchased at the price of self-sacrifice,” said TMC President and CEO Dr. Alfredo R.A. Bengzon in his message to the TMC community.

Dr. Bengzon also offered a toast as part of the finale of the Musicale.

“May the Spirit bring us light, learning, courage, audacity, love, trust and the tight bond of a united family – all bundled in a limitless package of peace! Here’s to the next 50 years and beyond!”

The second part of the golden celebration was a street party held at the Metrotent in Metrowalk, Ortigas on October 20, 2017. The party also featured a musical by TMC talents and live performances by upcoming band Fat Session and OPM Rock Band icon The Dawn led by Jett Pangan.

Fat Session brought the house down with their lineup of popular tunes from the 70’s to the current hits mixed with a good dose of humor.

The TMC crowd sang along with The Dawn as they played their signature songs Enveloped Ideas, Iisang Bangka and Salamat.

A thanksgiving mass was also held in the morning of October 20 at the TMC Augusto Barcelon auditorium officiated by Bishop Mylo Hubert C. Vergara from the Diocese of Pasig City.

Drawing strength from its 50-year journey, Dr. Bengzon said that “The Medical City will continue to stand proud and will prevail as a leader in bringing together everyone in this health ecosystem moving synergistically towards ensuring a healthy citizenry of this beloved country, always struggling but forever hopeful.”

What is cold-start or reverse dabbing?

How to Build a Buzz for a Product Launch