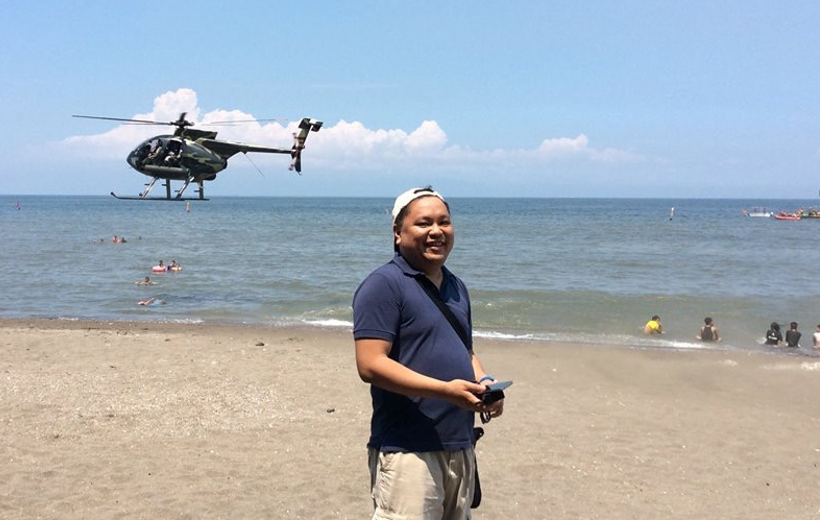 Junjun Fetizanan is a certified aviator and a programming enthusiast. As a flier he understands the close linkage between safety and communication. Pilots, for reasons of safety, ideally should be in touch with ground controllers during all periods from take off to touch down.

Junjun Fetizanan the Founder of a Philippines based startup Fame sketched for me the scale of the communication challenge faced by aviation and maritime logistics in the Philippines. Only 10 of the 85 airports in the Philippines have radar capability. There are 429 fishing ports and 821 commercial ports of which only two have a Vessel Traffic Management System. The situation is said to be similar across the region.

Today ships, boats and planes primarily communicate only on radio. Integration of weather, spatial data, two way messaging with the ground cannot be done over radio. The need for better, comprehensive but simple and affordable communication technology is urgent.

Junjun, started working on this problem in 2015. FAME is the outcome of these efforts. The innovation uses LORA technology.  LORA is Long Range Network WAN (Wide Area Network) with a range of over 21 miles. It is a low power wide area network (LPWAN) technology.

LORA WAN network architecture allows transmission of messages and data between devices. These can be relayed across a geographical area with the help of gateways. The data is aggregated and processed from a central network server.

Gateways are connected to the network server using standard IP connections. End devices use single hop wireless communication to one or many gateways. End point communications are bi directional. This enables automatic network wide uploading of software upgrades, messages and other data.

LoRAWAN data rates range from 0.3kbps to 50 kpbs. I believe that in time these data ranges will improve. Data is transmitted across the network in encrypted format. Devices, chips and other pieces of hardware manufacturers used over the network have incorporated security features. The communication over the network is secure.

The network is battery operated and power consumption is low. This enables network deployment even in remote locations. LoRA is an Internet of Things (IOT) technology. It is this capability that Junjun is leveraging for his innovation.

He is using sensors that conform to LORA standards. These sensors are placed in transponders that are located in a vehicle, ship and aircraft. Junjun is now in the process of building the ground network across the Philippines. 21 gateways are being installed, each at a cost of $1000. He expects the work to be completed in the coming months.

Hardware for FAME network and this includes transponders and other devices will be built locally by one of the leading manufacturers in the country. The manufacturer with whom a tie up is being finalized has additionally a strong nationwide marketing network.

The application for the FAME system has been built by an internal team of developers. FAME Proof of Concept and network is already in operation. Transponders have been installed in twenty craft. Flying schools, shipping and ferry operators are the first customers. The system is said to be working well.

Junjun is already thinking of expanding the FAME business to Indonesia. He is in the process of identifying local partners in that country. He is patenting the technology and has applied for a local patent with the concerned regulator.

Junjun’s venture appears to have taken the fast lane. It was just in November 2015 that he made a demonstration of the Proof of Concept in a local startup competition organized by www.ideaspace.org –  a not for profit venture. A hundred startups participated and FAME was amongst the ten selected startups. He received a grant of 500000 Philippines pesos.

Ideaspace conducts an annual competition for Philippine based startups. The competitors go through various hoops of competition. The final 10 startups are put through a three month course in business conducted by the Asian Institute of Management.

This is an excellent initiative that helps build innovation. It is worth emulation by other  countries. There are great minds everywhere – a bit of encouragement and training goes a long way to turn dreams into realities.

I was particularly impressed by the vision of the Founder. His choice of technology is particularly smart. LORA is becoming popular across the technology world. A not for profit alliance called the LORA Alliance is in place. Some marquee names like IBM, Cisco, ZTE and many others have already signed on to the Alliance.

A set of standards and protocols that everyone agrees to has been built by the Alliance. Already chip makers, sensor manufacturers, application providers, telecom companies and others are building innovations that conform to LoRA standards.

With the explosion of IOT devices across the world many startups are building their innovation on platforms and devices built by members of the Alliance. FAME is using IBM application platform for their system. The future of this innovation looks bright.

Planning for Retirement: 3 Things You Should Plan For