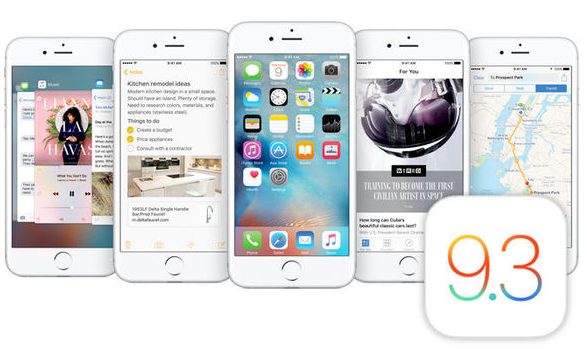 Apple’s latest OS, the iOS 9.3, is here.  The new OS system has been launched after several tests (almost seven betas), perhaps to ensure that the problem filled history of iOS 9.0 and iOS 9.1 doesn’t get repeated.

Though the best of the updates are being put on hold, considering the iOS 10 release in the upcoming months, it goes without saying that whatever incremental updates iOS 9.3 is offering its worth the users’ time and efforts.

Here we help you thumb through some of the best features of iOS 9.3

Night Shift for peaceful sleep: Of all the features, Night Shift is one of the most-talked about and most-sought after feature because it helps improve our sleep pattern. People these days tend to stay awake until late hours, glued to their phones, which in turn puts tremendous strain on their eyes, and in turn affecting their sleeping patterns. The blue light emitting from the phone is said to be the main culprit. Enter Night Shift that helps remove the blue light and thereby improves the sleep quality.

You can access Night Shift in Settings>Display and Brightness from where you could enable and disable automatically each day. You could do the same thing from the control center as well.

Note Security for Keeping Notes Secure: Apple, so far, offered only lock screen security. This time the company has decided to take it a notch higher by offering a password and Touch ID for securing Notes app as well.

Separates Still from Live Photos :  You enjoy capturing images and sharing them, but then you don’t like the tit-bits that come along with it. As in, the animation, which is not as per your taste or some nasty music that  has inadvertently crept in. In iOS 9.3 you can happily strip away the unwanted animation from the still version and come up with a Live Photo with a background of your own to share with your friends and family.

Just open any Live Photo from the Photos app and the tap share button. Then select Duplicate>Duplicate as still photo to share the new version.

Keeps a track of Wi-Fi Costing: How often you had to switch over to cellular data when your Wifi Assist signals are week? Is it often? Is it costing you much? Now, with iOS 9.3 update, you could keep a track of the data used and thereby control costs. Just visit Settings>Cellular and scroll down to the screen to know about the kind of data being used.

iBooks : eBooks and PDFs that users add will now in sync with iCloud. So now you can access your documents from anywhere, anytime, and from any device.

Despite all these pluses, still you are not sure whether or not you should opt for the iOS 9.3 upgrade, here’s the kryptonite, which will make sure that you go for this update, come what may.

According to security researchers at Johns Hopkins University, the new iOS update fixes a major security flaw. Right now, iMessage in the form of videos and files could be intercepted by hackers. And there’s only way to stopping this: installing iOS 9.3 right now.

Jini Maxin writes for OpenXcell – Mobile App Development Company that offers mobile app development services across the globe. A voracious reader who pours all her learning into producing well-researched and data-driven posts. For her latest posts follow OpenXcell’s Twitter page.