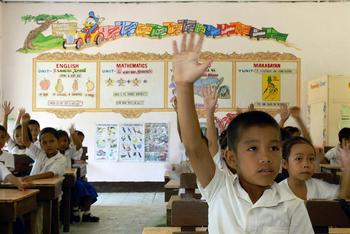 The Philippines has been noted for many things – its beautiful women, its lovely scenery, its hospitality – but recently it has received a new accolade: the education center of Asia. More foreign students are coming to the Philippines to study, because of its growing reputation for quality education, quality faculty members, and Filipino teachers proficiency in English as a medium of instruction.

According to the latest government report which was carried in the local press, a total of 47,478 foreign students are enrolled in Philippine schools. So far as nationalities are concerned, South Koreans, who have been the largest foreign group attending college in the Philippines for the last three years, top the list this year with over fifteen hundred new students, with Indians taking second place with 1,069. Iranians come in third with 1,089 and there are a thousand Chinese students. And judging by student visas issued, the number of foreign students will increase this year as 5,719 more visas have been issued by the Bureau of Immigration.

Only schools accredited by the Bureau of Immigration, the Department of Education, and the Commission on Higher Education are authorized to accept foreign students.

Today the Philippines is ranked among the top five countries in the world in terms of total numbers of English-speakers, and its schools are graduating an additional 470,000 more English speakers from college each year. This explosion in Filipinos speaking English has led to another quiet but important development. The Philippines has beaten India for two consecutive years as the Number One international call center in the world. James Grundig, writing in Epoch Times, said American Fortune 1000 corporation such as Citibank, JP Morgan Chase, and Oracle are gaining a competitive edge by outsourcing parts of their operations to the Philippines. As a result, without much fanfare, the Philippines has surpassed India as the world’s call center hub. CNN described it as “the Philippines greatest economic success story in the last decade.” It is now an $11-billion business, with an estimated 600,000 agents, compared to 350,000 in India.

As the world’s 3rd largest English-speaking country, the Philippines is considered one of the best places to study English since it is modern and updated here. There are more than 115,000 Filipino teachers with Master’s and Doctor’s degrees, and it is home to 2,299 higher institutions of learning, of which 547 are state universities, 109 are run by local governments, and 1,643 are privately owned. Diplomas from Philippine schools are competitive worldwide. Business and Accounting schools, for example, follow the American Generally Accepted Accounting Principles and International Reporting Standards, and its engineering and marine schools are registered in the APEC Engineer Registry and the International Maritime Organization’s white lists.

The Philippines is also known for the friendliness and hospitality of its people, and following graduation, many foreign students stay here to work in the Philippines and a number of them marry Filipinas and raise their families in this country.

Employment Strategies for PWDs to Help You Land the Right Job

5 Things To Know About Majoring in Accounting