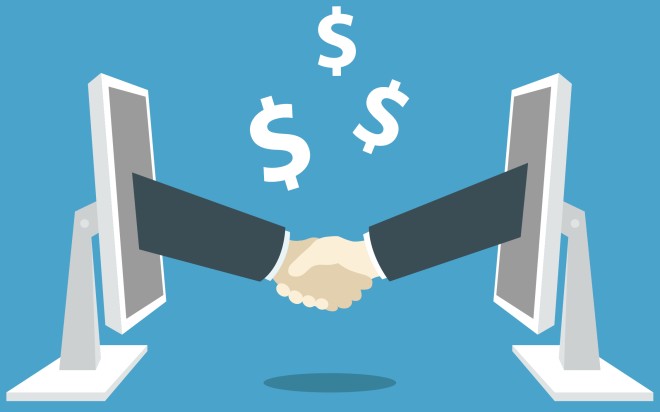 NEW YORK (AP) — When I realized I was paying off six different credit cards and not getting anywhere, I decided to consolidate my debt, like millions of other Americans.

I visited my local bank, asked for a $15,000 loan but was offered an interest rate higher than my cards were charging.

So I looked into online lenders and discovered a growing part of the sharing economy known as peer-to-peer lending, a system in which a group of investors pool money to loan to people like me.

The first company I went to, Upstart, was willing to lend me money but again, the interest rate was too high. Then I went to Prosper, the second-largest lender in the industry. Prosper found investors in my loan in two days and I had my money in five.

I never visited a branch or met a loan officer. And the interest rate of less than 9 percent beat the 13 percent offered by my brick-and-mortar bank.

After borrowing the money, I wanted to know more. Who were these “peers” and why did they think I was such a good credit risk?

The answer took me deep into an industry that has already attracted some of the biggest names on Wall Street, like Blackrock and Goldman Sachs, but remains below the radar of most federal regulators. Peer-to-peer lending is still untested by recession, and analysts say it can carry big risks for investors. Consumers, largely unfamiliar with the industry, could face interest rates that exceed even the most expensive credit cards.

The name “peer-to-peer lending” is somewhat misleading. While individuals do lend money, most of the funding for loans comes from hedge funds, insurance and investment companies, and wealth advisers. It took me three months to find a “peer” who invested in my loan.

Prosper, like the rest of the industry, is seeing exponential growth. The San Francisco-based service created $600 million worth of loans over the first three months of this year, more than triple what it did a year earlier, and it’s hiring as many as 10 loan officers and other employees a week, says CEO Aaron Vermut.

Prosper competes with Lending Club, which went public in December, and has reported a 100-plus percent jump in the amount of money it loans year over year. Both companies expect their loan growth to double or triple in the foreseeable future.

Prosper and Lending Club are just two of dozens of companies trying to compete. Some, like Upstart, specialize in loans for young borrowers with limited credit history. Others, like OnDeck, which went public last year, focus on loans to small businesses.

Peer-to-peers have been able to charge less than traditional banks largely because their costs are low. Prosper, Lending Club and others have no retail branches, and the risk is passed onto investors. As more investors put money into these loans, interest rates have fallen as well. Prosper loans in 2013 had an average rate of 16.8 percent. In 2015, the rate is 13.3 percent.

Even with this growth, peer-to-peer lending is tiny compared with big banks. JPMorgan, for example, has $187 billion in consumer loans on its balance sheet.

The lending peer I tracked down is Don Davis. I owe him $1,500. Davis’ company, Prime Meridian Capital Management, owns 10 percent of my loan.

“I take you at your word you’ll pay us back,” Davis joked in an interview.

Like many investors, Davis was attracted to peer-to-peer lending because other types of debt, such as bonds, had become unattractive. With interest rates and yields stubbornly low, it’s difficult to make much money in that market.

How does my 9 percent rate compare? Junk bonds, a risky type of debt, offer a yield of slightly more than 6 percent. Bonds from high-rated companies yield around 2 percent. And one of the safest types of debt, three- and five-year U.S. Treasury notes, have a yield of 0.93 percent and 1.50 percent, respectively.

“I see personal loans as being simple and transparent. That’s why I like them,” Davis said. “We looked at a lot of different investments that gave us the yield we were looking for, but many of them behind the scenes were overly complex and higher risk.”

“We like to invest in people,” O’Malley said. “We’re able to provide a service that a bank is no longer able to competitively provide.”

Looking Glass is small, with less than $10 million in assets, but it owns more than 6,200 loans and is growing quickly. Looking Glass had a 10.2 percent return last year on those investments.

I asked O’Malley if he owned part of my loan, but he said he only looks at data, not the person. He uses an in-house formula to determine the risk of defaults.

“We don’t want to know who you are,” he said. “We just want the numbers to tell the story.”

As demand grows, federal regulation has been slow to keep up with the industry. The Federal Reserve, the banking industry’s main regulator, has issued no rules on how the industry should operate. The Consumer Financial Protection Bureau has been silent. Only the Securities and Exchange Commission has weighed in.

In 2010, the agency ruled that offering peer-to-peer loans to investors amounted to selling securities and said Prosper and Lending Club had to be registered with regulators and provide disclosures to investors about where their money was going.

But the SEC’s job is to be a regulator for investors, not consumers.

Consumers are largely protected for the moment. Because companies like Prosper and Lending Club use a third-party bank — often it’s Utah-based WebBank — to process the loan, the loan is protected under the Truth in Lending Act and other consumer laws. However, by using a third-party, the lenders are able to bypass state usury laws.

Most loans are being made to highly qualified, often high-income borrowers at the moment. But industry executives acknowledge that the growing interest in peer-to-peer lending could attract subprime players.

And the industry remains untested. The loans have not been through an economic downturn, so there’s no data on how many could default in a recession. And because the loans are unsecured, the only recourse for investors if a borrower fails to pay them back is debt collectors.

Even industry executives acknowledge that the runaway growth could backfire. For instance, while Prosper has seen substantial growth, the platform is not consistently profitable.

“There’s frothiness in the industry right now,” says Prosper’s Vermut, “and when the environment changes, we will find out who’s really running a good business.”

Ken Sweet covers banking and consumer finance issues for the AP. Follow him on Twitter at @kensweet.