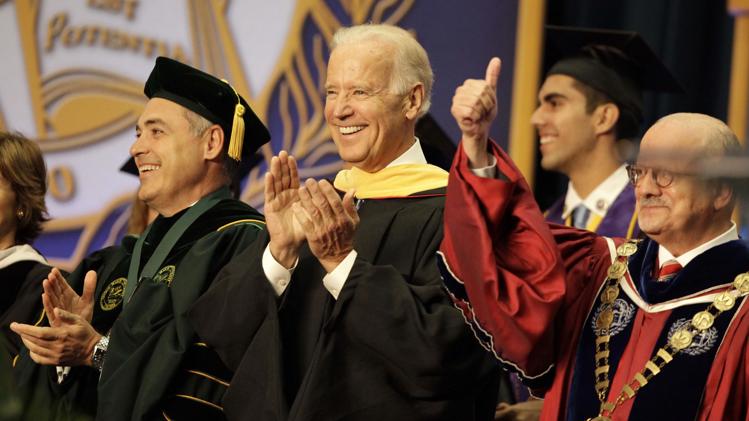 The Miami Dade College graduates from two campuses and their families, 2,000 strong, cheered as a procession of 39 flags from their home countries, entered the gym and opened the program. Biden acknowledged that he was addressing many immigrants and the children and grandchildren of immigrants, many from South America and the Caribbean.

Biden said a “constant, substantial stream of immigrants” is important to the American economy, urging citizenship for immigrants living in the US illegally.

“That’s why we have to act to bring 11 million people out of the shadows and put them on a path to citizenship,” Biden said. “These people are already Americans.”

When someone in the crowd shouted “Stop deportations!” he replied, “We’ll do that, too, kid, but let me finish my speech.”

Biden also applauded the Florida Legislature for passing a bill Friday to allow students living in the country illegally to pay in-state tuition at the public colleges and universities. Florida is the latest of 20 states to enact such a measure, and its passage marks a significant shift in the immigration debate in Florida away from a focus on immigration enforcement.

“More than half of you speak a language other than English at home, but you speak the language of America,” Biden said.

Biden, whose wife is a longtime community college professor, praised the Miami Dade students for pursuing their education, quoting the late novelist Gabriel Garcia Marquez in encouraging them to continue pursuing their personal and professional goals.