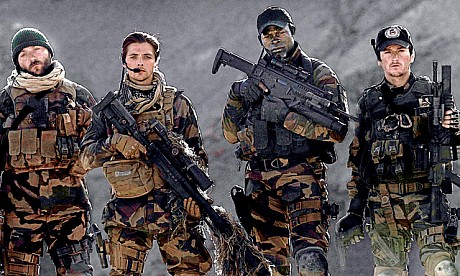 When I was a young Army officer (well, a 2nd Lieutenant, anyway, which only other 2nd Lieutenants believe to be a “real” officer rank) I was assigned to a Psychological Operations (PSYOP) Group. PSYOP doesn’t exist in the Army today; political correctness has softened the harshness of Psy War (Golly, “harshness” as an element of warfare? Perish the thought). It’s now called Military Information Support Operations.

Whatever we call it, the job of the Psy Warrior is to either induce or reinforce behaviors favorable to United States national objectives, assuming of course that the United States leadership actually has objectives (and can articulate them.) We trained with and deployed with other special operators so it was a challenging and exciting job, but I noticed that the Special Forces (Green Beret) teams seemed to have even more fun and adventure.

I was attached to these teams but not a real member of the team, so after a year in my first assignment I began training to become a Special Forces officer. In those days, there was the Army and there was Special Forces. That is to say, the common wisdom back then of Big Green (the conventional Army) lay in the fact that everything was hurry up and wait; that there was an SOP (standard operating procedure) for everything; that prior ways of doing things were proven and therefore to be duplicated whenever possible and “this is the way we do things around here;” and that the job of the Infantry was to fight and someone else would take care of getting the beans and bullets to us.

I learned very quickly what makes Special Forces different: all of these shibboleths were stood on their head. I think many of those lessons learned can stand us in good stead as investors, as well. Lessons like…

1. In unconventional warfare, there is no hurrying the process. It takes time to build relationships with the indigenous population, more time to train them, and more time to test them and prove to them that you will die alongside them if need be. This is a continuous process; it moves as quickly as can rationally be done but it is the antithesis of hurry up and wait.

2. There are no SOPs. Sure, in Vietnam you might have heeded the British experience in what was then Malaya, but there is nothing “standard” about dealing with a different culture, new information, and situations and terrains that are unique to the job at hand. Your response to a situation may be informed by others’ experiences, but it is your responsibility to determine what makes this situation different and adapt to it. “Improvise, Adapt and Overcome” is the SF mantra, not “What’s the SOP?”

3. Nothing is ever “proven” just because it worked somewhere else 5 times in a row. If that were the case, we’d still be using the Greek hoplite or Roman phalanx in fire and maneuver situations. Or, as succinctly stated by one fine NCO instructor I had when I looked around at the three items and one tool I had to perform a particularly difficult training mission, “Stop looking outside yourself for resources. Your most important resource is your brain. Use it.”

4. Special Forces teams live off the land most of the time. There are resupplies of essentials like ammunition as the situation on the ground allows but the resources that are native to the area are those most often used. Nobody drops SF troops bottled water. Unconventional warfare means you drink what the indigenous population you are training and fighting alongside drink and you eat what they eat. You never have enough of anything so you must constantly reallocate scarce resources to get the biggest bang (literally) for your buck.

How does understanding these distinctions help us become better investors? Let me count the ways…

1. Investing is a marathon, not a sprint. Having a plan and sticking to it for as long as it makes sense is the way to succeed. Slow and steady wins this race every time. If you are 80 years old and suddenly decide you have to make up for lost time, the market is no place to do it. I have had two difficult periods in my 40 years in this business, including one in recent years when I underperformed. But my eye was always on the long term, never on doing something stupid to try to rapidly over-compensate for something already done. I always remember that, like every facet of unconventional warfare, we must constantly learn, tweak, use what is valuable and discard what worked somewhere else or at a different time but is no longer working. There is no hurrying the process. The faster you go and the more anxious you are to chase chimeras, the less likely your chances of success.

2. There are few SOPs that mean anything in investing. Yes, the market over any 50-year period returned “x,” but how does that knowledge help you today? Are you supposed to believe that “x” is some sort of standard now? Do you have 50 years of investing left? Challenge every “sure thing” or “guaranteed path” to success. Take “As Goes January, So Goes the Year” as an example of an SOP that some investors use by which to invest or not invest. Back in January, I wrote disparagingly of the propensity to make something of the fact that the first 2 days in January were down, with some gurus noting that was a likely harbinger of a down year. Then it was the First 5 January Days Down Indicator, then, “If the month of January is down, it is likely the entire year will be down.” Of what possible value is an SOP like that? If you had sold in January, you’d have locked in a sizable loss and missed February, the best month in nearly 4 years. The year may still end down, of course, but the point is: each day in the market you must Improvise, Adapt and Overcome. That doesn’t mean you need to “do” something every day; maybe you simply decide that your current approach makes the most sense and therefore you’ll stick with it. But a truism, cliché, or SOP will not lead to your success.

3. Right now, Robert Shiller’s Cyclically-Adjusted-Price-Earnings Ratio (CAPE) is in disrepute because the market has clearly overshot where it “should” go based upon where it has typically gone in the past before correcting. Does that render CAPE invalid or of little interest? Heavens, no. The intelligent investor, like a good Special Forces A-Team, considers all the possibilities as having merit at some time — but neither shackle themselves to any one path for life (and then be as angry as a spurned lover when, this time, it doesn’t work out the way it has in the past.) Nothing is “proven” until it proves itself this time.

No one knows what will grab the popular imagination and what will not, at least not before it happens. Just because some indicator worked before doesn’t mean it will work today. There’s a reason I have returned to my reallocation roots after dilly-dallying around with some advanced quant theory which left me poorer than I was before! By diversifying across sector and asset class, we are protected from those days when everything does not go up in beautiful concert — and those days are more numerous than not!

What makes the markets so interesting is that every day they make fools of some and poets of others. (Some days, we are one and the next day the other…)

4. Like a Special Forces ODA (Operational Detachment “A” — what I had the honor of commanding back when we called them A-Teams,) you too must reallocate scarce resources. Unless you have unlimited wealth, you must decide between A or B, X or Y. And you must decide when to expend ammo and in pursuit of which targets; you can’t just waste it on some whim. That’s what strategic allocation ensures.

Allocation of your financial resources, and reallocation as appropriate, are constant logistical challenges we all face. In this case, you are the one on the financial battlefield. It is your money and your future that is at stake. I’m pretty certain, as nice a guy as he may be, if you followed Warren Buffett into Tesco (TSCDF), he won’t be sending you a check for the difference…

Employment Lawyers Can Help You Save Time and Money