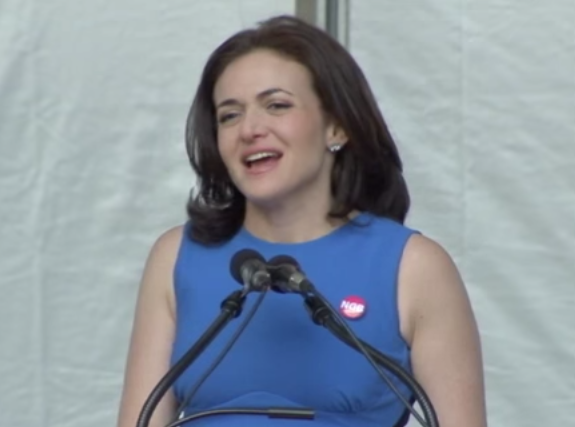 Facebook COO Sheryl Sandberg gave the graduating class of the Harvard Business School a speech on their Class Day, which is the part of the run up to commencement.

We have the full speech, along with a video here:

But we want to highlight one of the best things in the speech. It’s smart advice for just about everyone. Here is the full bit, but really it can boiled down to this: “Don’t be an idiot.” We’ve added our own emphasis where appropriate: As the world becomes more connected and less hierarchical, traditional career paths are shifting as well.

In 2001, after working in the government, I moved out to Silicon Valley to try finding a job. My timing wasn’t really that good. The bubble had crashed, small companies were closing, big companies were laying people off. One woman CEO looked at me and said, we wouldn’t even think about hiring someone like you. After awhile I had a few offers and I had to make a decision, so what did I do? I am MBA trained, so I made a spreadsheet. I listed my jobs in the columns and my criteria in the rows, and compared the companies and the missions and the roles.

One of the jobs on that sheet was to become Google’s first business unit general manager, which sounds good now, but at the time no one thought consumer internet companies could ever make money.

I was not sure there was actually a job there at all. Google had no business units, so what was there to generally manage.

And the job was several levels lower than jobs I was being offered at other companies. So I sat down with Eric Schmidt, who had just become the CEO, and I showed him the spread sheet and I said, this job meets none of my criteria. He put his hand on my spreadsheet and he looked at me and said, Don’t be an idiot. Excellent career advice.

And then he said, Get on a rocket ship. When companies are growing quickly and they are having a lot of impact, careers take care of themselves. And when companies aren’t growing quickly or their missions don’t matter as much, that’s when stagnation and politics come in.If you’re offered a seat on a rocket ship, don’t ask what seat. Just get on. About 6 and half years later, when I was leaving Google, I took that advice to heart. I was offered CEO jobs at a bunch of companies, but I went to Facebook as COO. At the time people said, why are you going to work for a 23 year old? The traditional metaphor for careers is a ladder, but I no longer think that metaphor holds. It doesn’t make sense in a less hierarchical world.

When I was first at Facebook, a woman named Lori Goler, a 1997 graduate of HBS, was working in marketing at eBay and I knew her kind of socially. And she called me and said, I want to talk with you about coming to work with you at Facebook. So I thought about calling you, she said, and telling you all the things I’m good at and all the things I like to do. But I figured that everyone is doing that. So instead I want to know what’s your biggest problem and how can I solve it. My jaw hit the floor. I’d hired thousands of people up to that point in my career, but no one had ever said anything like that. I had never said anything like that.

Job searches are always about the job searcher, but not in Laurie’s case. I said, you’re hired. My biggest problem is recruiting and you can solve it. So Lori changed fields into something she never thought she’d do, went down a level to start in a new field and has since been promoted and runs all of the people operations at Facebook and has done an extraordinary job.