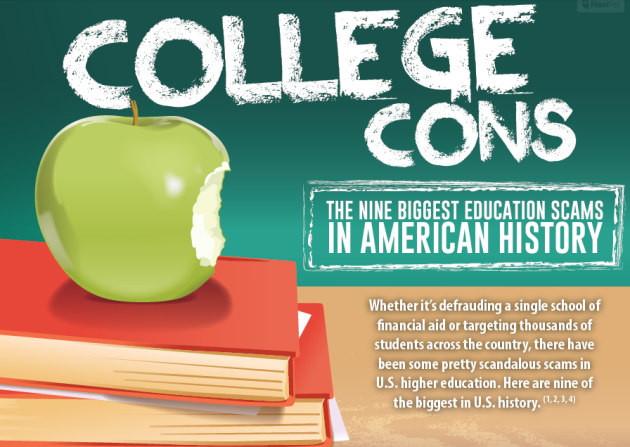 Negosentro.com | via Kyla Camille | When you apply for college and financial aid, the last thing you would expect is to be part of a large scale scam. Unfortunately, criminal minds find ways to dig into the pockets of everyone, including students who need financial aid.

The graphic below shows some of the largest scale scams in higher education to date, including details on what happened with Trump University. You also learn about the Shah brothers who hijacked 8 million email accounts from students in order to run a massive spam campaign which made them over 4 million dollars. There are instances of financial aid being scammed, some bribery, as well as faked documents. If it’s shady, it seems that someone found a way to do it and make a lot of money at it. Maybe if these criminals had studied more they would have realized that getting caught was inevitable, as far too often there’s a paper trail to follow.

How To Turn Your Small Business Into a Six-Figure Company

How to Stand Out at Marketing Events

Why Your Home Ventilation Is So Important for Your Health

April 13, 2021
Why Your Home Ventilation Is So Important for Your Health | Not all room air is the same. Most people don't realize that air...

Strategies for City Transportation Planning for the People

3 Tips to Keep Your Home Warm in Colder Climates

How would be the First Week after Relocation?