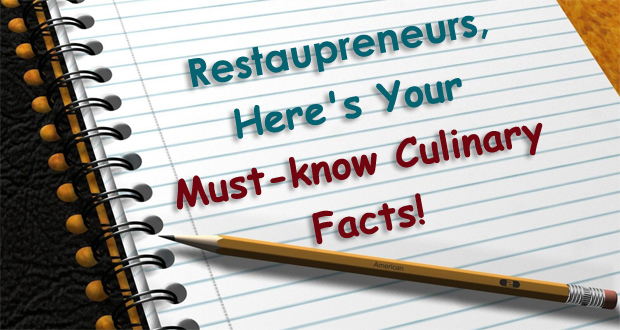 Negosentro.com , via ISCAHM | Restaupreneurs, Here’s Your Must-know Culinary Facts | You’re in the food business. You might think you knew the field you’re in. Well, do you have an idea that carrots were once color purple? Yes? Do you know why is a baker’s dozen 13?

Test your culinary facts bank and read along:

English bakers were governed by a trade guild called The Worshipful Company of Bakers. In fact, England has a long history of trade regulation which started closely in the 1260s when British bakers were notorious for shorting customers with skimpy loaves.

In 1266, King Henry III was so displeased by the problem that he revived an ancient decree that regulated the price of bread according to the price of wheat.  Bakers won’t break the law because they could be fined, denounced or worse, whipped. One common trick by that time was to give 13 loaves to any customer buying a dozen. Even if the loaves were light, the extra would cover the shortfall.

To prove that indeed the law was serious, in 1477 when the Chronicle of London reported that a baker called John Mund[e]w was forced to admit his guilt upon the pillory  for selling underweight bread.

Classical Greek and Roman writings refer to edible white roots, but these may have also been parsnips or the white rooted carrots of today which are often used as animal feed. The earliest vegetable definitely known to be a carrot dates from the 10th century in Persia and Asia Minor and would have been somewhat different from the orange rooted carrot of today.

It is considered that Carrots were originally purple then a mutant transpired which removed the purple pigmentation producing a new race of yellow carrots. Subsequently, orange carrots were then developed.

Some say that orange carrots were meant for entirely political reasons. In 17th century, Dutch growers are thought to have cultivated orange carrots as a tribute to William of Orange – who led the struggle for Dutch independence.

3. Color of twist tie on bread packaging has meaning

The color on the twist tie of bread package isn’t just there for design. The color actually indicates which day of the week the bread was baked on!

Amazing, but what for?

Well, the color is not for the customer but for the person stocking the shelf. Determining which packets of bread are old would be easier plus, it helps the person identify which of which is to be removed from the shelf.

Through this, employees can simply remove specific colors rather than looking closely at the tabs which usually show the expiration date.

Each company has their own color code which usually discovered online, by asking the bread stocker at the store, or by emailing the manufacturer.

You choose. Another amazing bread culinary fact is that in the mountains you need to adjust your bread machine for high altitude and also your bread recipes. Your dough will rise faster because of the higher air pressure.

“Disnar”, was the old French word by which “dinner” came from. In fact, it means “breakfast”.

Why on earth did this word that meant the earliest meal of the day become the latest?

Traditionally dinner (meaning ‘breakfast’) was the first meal of the day, eaten around noon.  It also happened to be the biggest meal of the day. Eventually, more meals started being added to the day with people eating light meals before the large noon meal of dinner.  Rather than calling these earlier meals that means breakfast (dinner), the name “dinner” now stuck as meaning the largest meal of the day.

The term was originated to distinguish the flavored drinks from hard liquor, or spirits.

Some stories would point the word ‘soft drink’ to simple advertising. The manufacturers of flavored carbonated beverages were having difficulty selling nationally because these beverages’ names varied from region to region and even city to city. For instance, in United States and Canada, carbonated beverages are called pop, some, soda, and in yet other parts there are other names.

In England, for instance, soft drinks are called “fizzy drinks” in Ireland they were called “minerals”. So because they couldn’t refer to their product in the generic sense on national (or international) advertisements, the manufactures chose the term “soft drink” to be more or less a universal term for their non-alcoholic carbonated beverages.

The first cooking contest is said to have been held is about 600 B.C., at the instigation of an Assyrian king. The winner of the contest? That we all don’t know, but he must have had trained with the champions, don’t you think?

Step Up Your 2020 Digital Marketing Game with These Tactics

July 7, 2020
Negosentro| How dogman can help you? |If you want to be a crane operator, truck driver, or construction site worker, you will need a...