by Melissa Korn | via WSJ |

In an effort to make its traditional case studies and management guides more relatable to a visually-driven generation of students, the organization has begun adapting some texts in the style of manga, the hugely popular Japanese comics.

Robert Austin, a former HBS professor and current faculty member at the Copenhagen Business School, released his first comic in summer 2009, a graphic novel depicting an IT security crisis at an online retailer. It sold about 7,000 copies last year, Betses says, after taking a few years to gain traction. A case is considered to be doing “pretty well” if it sustains annual sales of 5,000 copies.

The newest of HBS’s four graphic novel cases is a visual version of “Apple’s Core,” a classic study by HBS entrepreneurial management professor Noam Wasserman that tells the story of how Steve Jobs and Steve Wozniak founded the famous computer company.

That one was the brainchild of Thomas Alexander, who about three years ago tested a graphic version of another case with his students at the Asian Institute of Management in Manila. He wanted to give an assignment they would actually do, and a 50-page, jargon-heavy case wasn’t going to cut it. After assigning the more visual version, class attendance topped 90% on discussion day.

Alexander was also teaching the Apple case at the time, and figured the origin story could easily be told in graphic form. (After all, the Bible was already available in a manga adaptation.)

He got Wasserman’s blessing, wrote a script, and partnered with a Filipino graphic artist to illustrate the story.

Wasserman says the new version lets students relate to the characters more deeply, adding a “visceral” element to the analytical side of the case-study exercise. It also makes the story more accessible for those who aren’t native English speakers. For example, it’s easy to show Wozniak looking dejected and betrayed in just one frame, whereas it might take a few sentences to get the same point across in text form.

Wasserman continues to use the text version of “Apple’s Core” in his HBS class, but offers the visual version as a supplement. When he left a stack on his desk during his most recent class, he says, “they all disappeared.”

Still, it has only sold about 30 copies outside HBS in its first semester available to the public. Betses says some professors may be concerned that a picture book is nothing more than a junior-varsity version of a case study. Wasserman and Alexander insist that it’s not a “light” version of the original, just a more visual one.

Below, six frames from “Apple’s Core.” 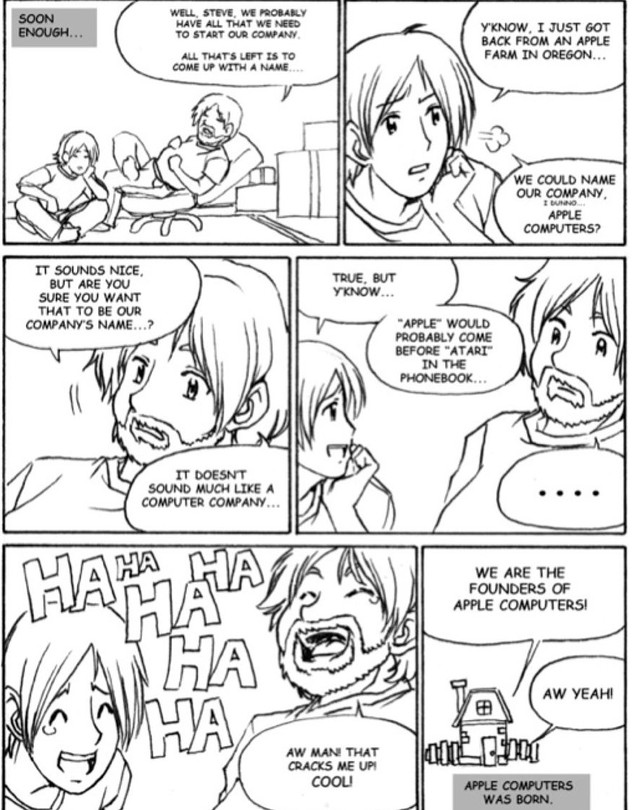