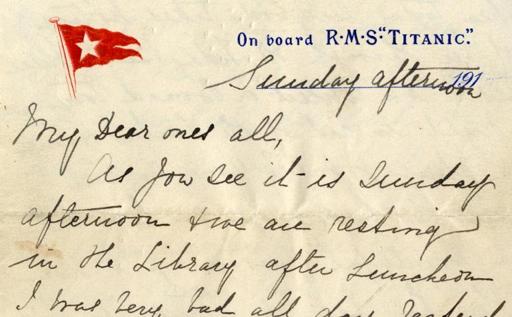 The price tag paid by an unknown bidder breaks the previous record for a Titanic-related letter, which had stood at £94,000, according to the auctioneers.

Titanic sank on its maiden voyage with the loss of more than 1,500 lives. It struck an iceberg in the North Atlantic while crossing from Southampton to New York, sinking below the waves in the early hours of Monday, April 15, 1912.

Emigrating to Canada, Hart and her daughter Eva made it into the Titanic lifeboats and were rescued by HMS Carpathia, but her husband Benjamin was among the dead.

The letter, written on Titanic stationery and dated the Sunday afternoon before the sinking, was due to be delivered to Hart’s mother back in Britain, upon the ship’s return to Southampton.

Hart later found it in a pocket of her husband’s coat, which she had with her.

The letter, headed “On board R. M. S. ‘Titanic'”, comes complete with an envelope embossed with the White Star Line flag.

“My Dear ones all,” Hart wrote.

“As you see it is Sunday afternoon and we are resting in the library after luncheon. I was very bad all day yesterday could not eat or drink and sick all the while, but today I have got over it.”

She described going to a church service with her daughter and the voyage so far.

“Tho they say this Ship does not roll on account of its size. Any how it rolls enough for me, I shall never forget it. It is very nice weather but awfully windy and cold. They say we may get into New York Tuesday night but we are really due early Wednesday morning, shall write as soon as we get there.”

“The importance of this legendary item cannot be overstated,” said Andrew Aldridge, from Henry Aldridge and Son Auctioneers in Devizes, southwest England, which sold the letter.

It is “the only known surviving example of its type to have been written on that fateful day, surviving the sinking, and having belonged to such a well-known survivor,” he said.

“The letter and envelope are in remarkable condition, with an impeccable provenance, and they represent a truly unique opportunity to own the finest example of its genre in existence. It is quite simply the jewel in the crown of Titanic manuscript ephemera.”

Best 5 Insane Activities In Dubai To Try Before You Die