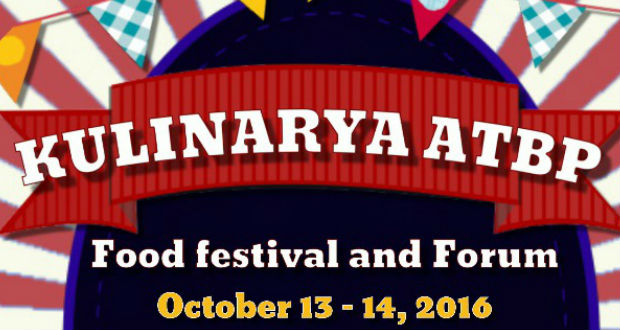 The Philippines, with over 7,000 islands, would never run out of delicacies and cultures to discover and experience. Besides, it’s something that we live with everyday. The recently held Kulinarya Atbp Food Festival and Forum highlighted this growing and exciting trend on culinary tourism, with two women empowering this patronage through their own localities. It was held at the Yuchengco Museum, RCBC Plaza last October 13.

The Kulinarya Atbp is a partner of Enderun Colleges, through Ms. Alu Aran’s event management class.

Up in the north, the first lady of Malabon thought about turning their little city into a tourism spot, even without the pristine beaches or towering mountains. Because of Malabon’s narrow streets, Chef Melissa Oreta decided that tricycles would be the best option for the Malabon Heritage and Food Tour.

As a culinary tourism advocate and educator, Chef Melissa and the city government have chosen these restaurants which basically represents the culture of the city, most of which are passed on through generations and are only found in Malabon.

As the wife of the mayor, Chef Melissa and the team have provided additional income to the restaurants and accredited tricycle drivers included in the tour.

Down the south, it isn’t just about hot spring resorts and white-sand beaches when pertaining to Laguna, Batangas and Quezon province. If you turn art and food into business, then it’s something that wouldn’t go out of style. In the rise of airbnbs, avid art collector and hobby enthusiast Boots Alcantara and wife An Mercado-Alcantara decided to create one, with a country inn feel. Casa San Pablo, with its cozy surroundings, gives a taste of how living in San Pablo is like. An Mercado-Alcantara, a writer, clay artisan, culinary history enthusiast is Casa San Pablo’s innkeeper, together with her husband.

On the other hand, Viaje Del Sol is a cultural itinerary around Laguna and nearby towns. It’s kind of a DIY tour, but the places that you’d get to visit are listed, together with a map. With the tour, you’ll get to discover Laguna’s artists and culture, including Patis Tesoro’s Patis Tito Garden Cafe, Carlitos Ortega and his brass sculpting workshop, Villa Escudero, Mandy Mariño’s Cafe Lago at Sampaloc lake and Ugu Bigyan’s pottery place turned into cafe and studio.

With many of the tourists opting for mainstream tourist spots, it’s time for cities like Malabon and San Pablo to step up their games and show the rest of the country that even in the smallest places, you can find the best things.