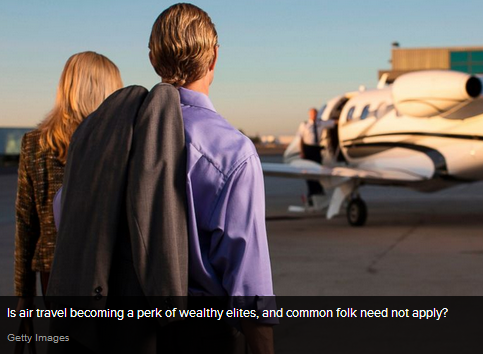 By RICK SEANEY, CEO of FareCompare | via Good Morning America |

Everyone moans about the high price of airline tickets and sometimes they’re very high. Like now, when non-stops between New York and Los Angeles in July are running about $600+, whereas May flights could be had for less than $300.

But summertime, like Thanksgiving, is a peak travel season when demand soars and airlines are happy to raise prices, knowing we’ll pay that fabled “whatever.” But we’ve also seen studies that suggest airfares have risen fairly sharply over the past several years, as much as 12 percent.

So here’s the question: Is air travel becoming a perk of wealthy elites, and common folk need not apply? Not yet. Are we getting closer? That depends.

The price of a plane ticket rests on what I call the four pillars of pricing: competition, cost of fuel, capacity or seat supply, and, as always, demand for air travel. Pay special attention to that first one because competition is disappearing.

Why? Airlines are disappearing. AirTran makes its final flight Dec. 28, then vanishes into Southwest. Continental seems like a distant memory, but its merger with United only took place a few years ago, as did Northwest’s with Delta. Coming up, US Airways goes away once the details of its marriage to American are all wrapped up.

In the meantime, the cost of fuel, currently just over $100 per barrel, remains high, though nowhere close to the nearly $150 price we saw in 2008. Next, capacity or seat supply is right where the airlines want it, which is down more than 10 percent from the pre-2008 fuel crisis. You can tell by asking yourself this question: How many empty airplane seat have you seen lately? When airlines can fill even middle seats, airlines are in the catbird seat. Remember, just a few years ago, investing in an airline was considered nuts; today, the profits are rolling in.

For the time being, demand remains fairly decent in a tepid economy. If you doubt this, go back to the empty seat question. So the next question is: Are we willing to pay any price for travel, at any time? For some, yes, but for most of us the answer is a resounding no. Just look at recent attempts by airlines to raise prices: Except for those aimed squarely at the business traveler (whose boss usually picks up the tab), airlines failed to find traction with most hike attempts.

In other words, the thumb on the scale of air travel equity is slowly but surely sliding from passengers to airlines. Yes, there is still an occasional crumb for consumers, like the Department of Transportation’s proposed rule that fees be shown as “every point” in an airfare transaction, which sounds good, and I’m absolutely in favor of fee transparency, but at every step of an online airfare purchase? All I can picture is some poor schmo thumbing down his smartphone, laboriously trying to get past inches and inches of densely packed, convoluted fee pricing information, just to find out what his ticket will cost. Carpal tunnel syndrome, anyone?