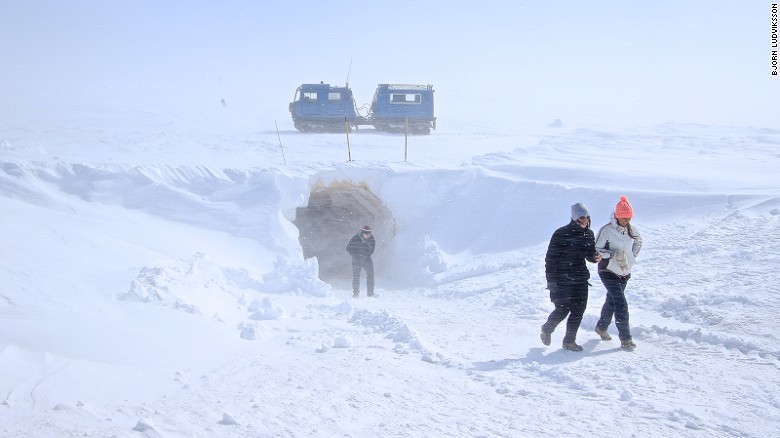 (CNN) Several years ago, a team of Icelandic entrepreneurs dreamed of tourists not just exploring the surface of Iceland’s glaciers, but actually getting inside of one.

Located in the western part of Langjokull (Long Glacier), and 1,260 meters above sea level, the ice cave stretches deep underground giving visitors the chance to see ice that’s been forming over centuries.

Stepping inside the cave is daunting at first.

Visitors strap crampons onto their shoes to navigate the slippery and slushy floor.

Eyes need to adjust from the shocking bright white surface of the glacier to the dim LED-lit interior.

Jagged cuts in the ice turn smooth and the colors of the ice change as visitors get deeper, changing from a cloudy white to shocking deep blues.

Information about the island’s receding glaciers line several sections of the cave, along with benches to sit and enjoy the tunnel.

Visitors are treated to views of gaping crevices as they run their fingers along the walls of the tunnel.

A special area in the cave, which developers named the “chapel,” with blocks of LED-lit blocks of ice supporting wooden beams, will serve as venue for parties, weddings and concerts, says Sigurdur Skarphedinsson, managing director of Into the Glacier.

The ice cave, which consists of tunnels and caves that stretch 500 meters into solid glacial ice, is an awe-inspiring feat, and one that must be maintained.

“There are many challenges when it comes to building and taking care of an ice cave high up on an ice cap,” says Skarphedinsson.

“The weather is probably the biggest factor. We are dealing with extreme weather up there.

“A typical day during the winter involves clearing the entrance every day. There isn’t any sign of an entrance after a snow storm.”

It’s easy to forget that there’s ice in Iceland during the summer.

Each June, the tiny North Atlantic island with a population of 325,000 people transforms from a snowy white and rusty brown landscape to lush greens and vibrant yellows as grass, moss and plants awaken after a long and dark winter.

In fact, 11% of the country is covered in ice from several glaciers.

Langjokull, the second largest glacier on the island, was chosen due to its proximity to Reykjavik.

It’s 130 kilometers to Husafell, the town where the tour begins, from Reykjavik.

“It’s really accessible and there are not too many crevices in the area we chose,” says Skarphedinsson.

Indeed, crevices are a concern as fresh fallen snow can lightly cover huge gaps in the ice, which could damage vehicles.

Because of the danger, the trip to the cave is an experience in itself.

Guests board a 20-ton customized monster truck designed to traverse the soft, sloping snow and rocky ice of the glacier.

One of the guides, Arngrimur Hermannsson, explains that a unique vehicle is needed to roam the challenging landscape.

“We have a tire pressure system where tires can deflate while we drive,” says Hermannsson. “We need to do that to be able to go over soft snow.”

He’s proud of his truck, named the Ice Explorer, which seats ups to 45 passengers.

The truck was acquired from NATO, where it was originally used as a cruise missile launcher.

“I had to sign a contract saying that I would be the last owner of the vehicle,” says Hermannsson. “NATO doesn’t want it in just anyone’s hands.”

On clear days, the climb on the barren, icy desert to the ice cave is magnificent.

During the five-kilometer climb from the base camp, Hermannsson explains the impact of climate change on Iceland’s glaciers along with the geology of the region.

The project managers ensure that the environmental impact of the ice cave is minimal.

“We’ve only removed 5,500 cubic meters of ice from a 900-square-kilometer glacier,” says Skarphedinsson. “It’s a bit like taking a drop of water from a bathtub.”

It’s estimated that the ice cave could last 10-15 years without maintenance.

“We assume that in 10 years, some parts of the ice cave will need to be rebuilt,” adds Skarphedinsson. “There’s more pressure on the ice in the lower part of the ice cave and the glacier itself is moving slowly.”

Based in Reykjavik, Iceland, Jenna Gottlieb has been published by the Associated Press, Dwell Magazine, The Independent, New York Post, Reuters, Reykjavik Grapevine and others.