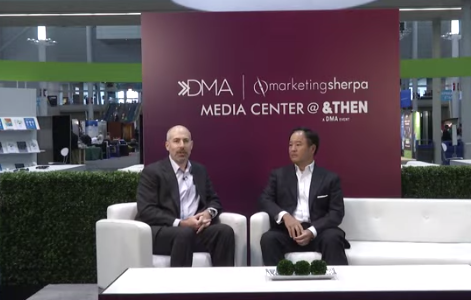 B2B companies often face a struggle with communications to the outside world. Regularly, products or technologies are shrouded in secrecy with an occasional blimp on social media.

At &THEN 2015, Jon Iwata, Senior Vice President of Marketing and Communications, IBM, sat down with Daniel Burstein, Director of Editorial Content, MarketingSherpa, to discuss how B2B companies can have a voice in a consumer world.

Simply, Jon talked about how to communicate brands and products, how to establish authority and credibility among employees and how employees can become company advocates on social media.

You can watch the full interview with Jon Iwata here:

How to communicate brand and products to the world

Although IBM is primarily a B2B company, for many it remains a household name in technology, innovation and computer science.

“Even though we are a B2B company, we want to be a company that is relevant to millions and millions of people,” Jon said. “You can call them consumers; you can call them future IBMers, future business decision makers, shareholders, neighbors.”

“We still want to be known; recognized; frankly, admired; and relevant to people,” Jon said. IBM is an early innovator in taking some of these complex B2B technologies and communicating them through more B2C means.

IBM took this approach when developing a computer that can make sense of communications and non-linear thoughts, such as tweets.

“We gave this technology a name — Watson, after our founder,” he said.

Even though the technology is a B2B product, IBM wanted to share its new findings in a way that everyone could understand and embrace.

“We gave it a persona on television. … We gave it a voice; we tested many different voices,” Jon said. “We presented it to the world not as a super-computer, but as a breakthrough — the first computer of its kind that isn’t programmed and learns,” Jon said.

Watson eventually went on to play (and win) Jeopardy.

IBM found a way to make its seemingly B2B-only product known and recognizable to the consumer-world in a way that not only caught the attention of viewers but also became a conversation piece.

How do you communicate the knowledge of your innovators with the world?

Marketing the technology is a feat in itself, but it doesn’t start for IBM after the product is created. Rather, it’s an active collaboration with the research scientists throughout the development process.

With a very large company like IBM, several projects are under development at any given time.

“Generally speaking … we are a big proponent of social networking,” Jon said.

Both internally and externally, IBMers use social media to stay in the loop of projects and developments within the company.

“What we realized pretty early on is, look, we want IBMers to be out into the world and to be influential in their fields, whether it’s computer science or consulting. We have, for decades, encouraged our people to be at academic conferences, at technical conferences, at events like [&THEN],” Jon said.

People throughout the organization are encouraged to participate and share their influence with others in the industry.

In fact, Jon said, “We expect them to not only consume literature, but to publish and to be influential in the literature. So social is an extension of all of those different places and ways that people learn about their profession and contribute to it.”

Employees are expected to become influencers in their spheres — not just to promote the IBM brand, but the employees’ personal branding as well.

How to approach employees with communicating via social media

When it comes to social media and B2B industries, many companies are still in the dark about the interworking of research and development.

Jon said, “Since we want our IBMers to be at the forefront of their professions, we said to them, ‘We not only want you to embrace social, we want you to be good at social,’ so we adopted guidelines and policies … helping them understand how to be effective.”

When it comes to engaging others on social media, like LinkedIn and Twitter, Jon explained, “Our motto of ‘Think’ speaks to the business of IBM and our industry, but it also speaks to what we want IBMers to do … to be intellectually curious and to be a part of the conversation.”

As far as what employees decide to share on social media and the Internet, Jon said, “Our people — I don’t think it’s unique to IBM by any means — if they’re not going to give away trade secrets in a parking garage at midnight, they’re probably not going to do it in the Twittersphere.”

Many B2B companies go head-to-head against others selling similar products or services, so it’s understandable that it’s a risk whenever you entrust employees with sensitive information that is a key differentiator in the marketplace.

However, Jon said, “Most of the things that you would imagine being a concern aren’t new; it’s just business behavior, ethical business conduct, responsible business conduct. We now, though, have to train our people … to understand that the social world is not exactly the same as other domains, as a human interaction. Things can go wrong and blow up very quickly. But, I think, if we trust our people to use good judgement and to make it clear when they’re speaking on behalf of themselves … or actually, if they’re speaking on behalf of the corporation, which is occasionally the case, we’re going to be fine.”