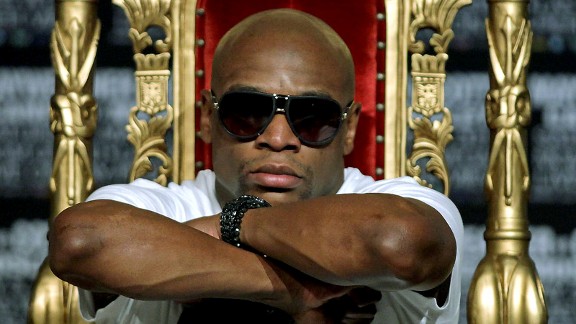 by Kurt Badenhausen via Forbes |

Floyd Mayweather has been cashing multi-million checks for his fights for more than a decade. He banked at least $25 million for each of his past nine bouts going back to 2007 when he defeated Oscar De La Hoya in the most watched fight in the history of boxing pay-per-view events. Mayweather has earned almost $400 million in the ring since he turned pro in 1996 after the Olympics, but he has never had a year like this past one.

Mayweather earned $105 million during the past 12 months for 72 minutes of work in the ring for fights against Canelo Alvarez and Marcos Maidana. The payday puts Mayweather atop Forbes’ annual list of the world’s highest-paid athletes for the second time in three years. Mayweather is the first athlete, besides Tiger Woods, to crack the $100 million earnings threshold (Michael Jordan, Michael Schumacher and Mike Tyson have also turned the trick on an inflation-adjusted basis).

The September Mayweather-Canelo fight billed as “The One” set records for highest PPV gross ($150 million), live gate ($20 million) and total revenue (roughly $200 million). The Canelo fight marked the second bout in the blockbuster 30-month, six-fight deal Mayweather signed with Showtime in 2013. Mayweather earned a guaranteed $32 million for his May fight with Marcos Maidana where the PPV buys are expected to finish between 900,000 and one million when they are all counted, compared to 2.2 million for Mayweather-Alvarez. Mayweather is the most popular boxer on the planet which helps drive PPV sales, but his paychecks get a boost because he also serves as fight promoter, in addition to pugilist.

Real Madrid and Portugal national team star Cristiano Ronaldo leads a group of 15 soccer players in the top 100. Ronaldo ranks second overall with total earnings of $80 million. We estimate his pre-tax Real Madrid salary, including bonuses, at $52 million for the past 12 month (Ronaldo’s salary net of taxes is often reported in the press). Ronaldo has 11 endorsement partners like Emirates, Nike, Samsung Electronics and Toyota Motor that generate $28 million a year in income. Real Madrid locked up the reigning player of the year in September for five more years in a deal worth $200 million, plus bonuses. Ronaldo has one of the biggest social media followings on the planet with 83 million Facebook fans and 26 million Twitter followers (see “The Biggest Athletes On Social Media”).

LeBron James ranks third with earnings of $72.3 million. James is the NBA’s biggest endorsement star, thanks to deals with Nike, McDonald’s MCD +0.73%, Coca-Cola , Upper Deck and others. Sales of his signature Nike shoes were tops among active players at $300 million in the U.S. during 2013, according to research firm SportsOneSource, and his jersey was the NBA’s best-seller. James also made millions from Apple AAPL -1.09%’s purchase of Beats by Dre for $3 billion. James had a very small equity stake in the company and made the brand a must-have accessory by outfitting the 2008 U.S. Olympic basketball team in Beijing in the high-priced headphones.

Lionel Messi ranks fourth at $64.7 million. His streak of four straight FIFA Ballon d’Or awards given to the world’s best soccer player was broken in January by Ronaldo. The two compete on the pitch as the stars of the sport’s two biggest clubs, Barcelona and Real Madrid. In May, Messi signed his seventh contract in 11 years with Barca. The deal is expected to slightly exceed Ronaldo’s pact on an annual basis. They also vie for sponsor dollars as the premier figures in the world’s biggest sport. Messi’s endorsement portfolio includes Adidas, Electronic Arts, Gillette, Herbalife , PepsiCo PEP -0.03% andTurkish Airlines .

Rounding out the top five is NBA legend Kobe Bryant at $61.5 million. Bryant had the highest salary in the NBA for the fourth straight year during the 2013-14 season. His $30.5 million salary is nearly $8 million higher than any other player. He inked a two-year, $48.5 million contract extension in November that will keep his on-court salary tops in the NBA. Bryant missed all but six games of the 2013-14 season after a fracture in his left knee, but his jersey was still the NBA’s third best seller during the season after James and Kevin Durant. His deals with the likes of Turkish Air, Lenovo, Hublot, Nike and Panini are worth $30 million annually. Bryant invested $4-6 million this year to buy more than 10% of emerging sports drink BodyArmour. It was the first investment of his new company Kobe Inc.

Our earnings figures include salaries, bonuses, prize money, appearance fees, as well as licensing and endorsement income paid out during the 12 months between June 1, 2013 and June 1, 2014. We do not deduct for taxes or agents’ fees. We also do not include investment income unless it is a stake in a company tied to a sponsorship like James’ Beats deal.

The 100 highest-paid made a collective $2.75 billion over the last 12 months, up 5% from last year. There are 29 newcomers to the list led by Atlanta Falcons quarterback Matt Ryan, who came in at No. 10 with earnings of $41.8 million. The entry point for the top 100, who come from 27 countries across 10 sports, was $17.3 million compared to $16.4 million last year (see “Highest-Paid Athletes: Behind The Numbers”).

Tiger Woods held the top spot as the world’s highest-paid athlete for 11 of the last 12 years with only Mayweather breaking the streak in 2012. But Woods’ earnings took a hit when Electronic Arts sent him to the sidelines in 2013 when EA announced it would end its relationship with Woods and his eponymous video game after 16 versions. The series generated nearly $800 million in sales, according to NPD Group. Woods’s prize money is also down as back surgery has kept him off the course since March. Woods ranks No. 6 with earnings of $61.2 million including $55 million from endorsements, appearances and his golf course design business, which is scheduled to open the first Woods-designed course this fall in Cabo San Lucas, Mexico.

This year’s list features the same trio of women as last year. Maria Sharapova leads the way at No. 34 with earnings of $24.4 million. Her earnings were impacted by Nike’s sale of Cole Haan in 2013, as Sharapova received hefty royalties on her line of Cole Haan shoes when it was under the Nike umbrella. Sharapova won her second French Open title this month and fifth Grand Slam overall. Good timing for Avon Products  which announced a new deal with Sharapova this week.

Sharapova is joined by two fellow pros in tennis, which is the only major sport where the money for women comes within earshot of matching that of the men. China’s Li Na ranks No. 41 at $23.6 million. She rose to a career high world ranking of No. 2 in February after winning the Australian Open the previous month for her second career Grand Slam title. The win triggered a massive bonus from sponsor Nike, as well as her other endorsement partners. Li also shills for Babolat, Rolex, Samsung, Mercedes and multiple Chinese companies. Serena Williams ranks No. 55 with $22 million in earnings split evenly between prize money and endorsements/appearance fees. Her $56 million in career prize money is almost double her closest competition in Sharapova.

That Elusive Gold – Home amongst the goldfields

3 Things Your Business Must Have to Succeed