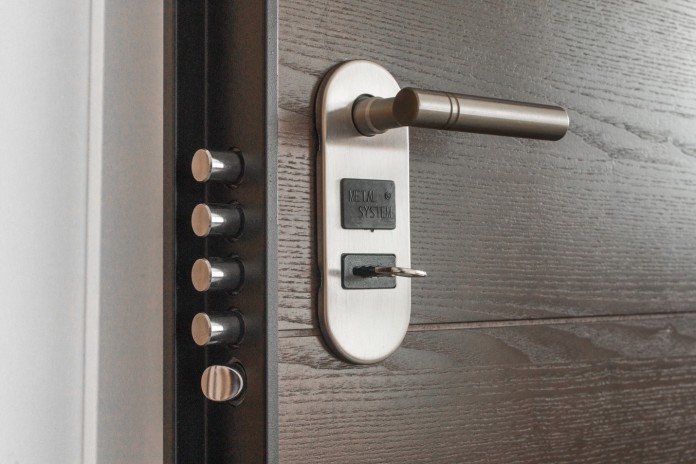 This system of gate smart lock uses the fingerprints for working. The human fingerprints are unique and extreme in detail. It is often very difficult to take these fingerprints and also to alter the whole lifespan of that individual. These are appeared to be long-term makers of human identity. The technology has used this unique system of fingerprints for securing access to door system.

It has a fingerprint sensor, lighted switch, membrane keypad, and power adapter.

Fingerprint sensor– It is the major part for biometric of the user.

Lighted Switch– It allows knowing about the disengagement of lock through receiving the desired impression.

Membrane Keypad– The fingerprint impression can be altered with PIN or custom code digit.

Power Adapter– This is mainly joined with the lock for providing it power.

There are multiple advantages associated with this system such as these are reliable and non-intrusive. However, these are relatively expensive system than other door lock security system. It gives the happy feeling that no one can steal those fingerprints and you cannot also leave fingerprints at home. This system is perfect regarding security.

The basic purpose of this digital door lock is to overcome general security issues. It is becoming more reliable and useful as this is using the ‘smart’ technology. The use of smart technology is taking the technology in another way. It is also needed well to cope with the automation system of the homes.

The use of fingerprint door lock system can help to achieve all those major purposes. The trend is also followed by many businessmen for making their system more secure. They mainly use fingerprint digital door lock systems for enhancing the security of their privacy and property as well (Doh & Ha, 2015). The system incorporates many other advantages with the use of biometric systems. It is also stated that with the use of this system, Iris scanning has control over the security breaches.

With these advantages, there are many other disadvantages as well. These are powerful but still, there are some other disadvantages of it. There are scanners that use the optical system to obtain the information. These scanners can easily be fooled by a single image of the finger. While using the mold, this capacitor based scanner can be caught by any person. However, the situation could be controlled while using the pulse and heart detectors which is also called the live finger detection.

The other major issue with this system is that the system can’t really reset the fingerprints easily. In the case of having a normal password, the situation is not much difficult such as to rest the password.

The other difficult situation is that in case of having any scars or cuts or abrasions, the scanner will fail to recognize the desired impression. These door locking system majorly face such type of issues and the other one is losing power in case of battery discharge or power cuts. The issue of power cuts and battery discharge are the most common issues which are associated with these door locking systems (Seo, Ko, & Noh, 2015). It could leave the user outside office or workplace stranded. The mechanical system is used in such situation then which could also create burdensomely. A good power system is needed for the working of this door lock system. This is the thing which one must need to see for using this fingerprint door lock system. The whole range of the system can be used for providing main power to this digital door lock system.

Despite all these issues, it is still the system which is used world widely as this is bringing innovation to the automation system of homes. This digital door lock system also helps to work well in other places such as in banks institutions and offices. The system of fingerprints lock is pretty awesome and deals well with innovation. These are secure, affordable, non-intrusive and almost safe for use.

Erica Silva is a blogger who loves to discover and explore the world around her. She writes on everything from marketing to technology, science and brain health. She enjoys sharing her discoveries and experiences with readers and believes her blogs can make the world a better place.