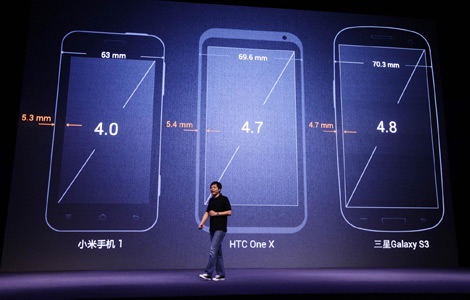 Chinese smartphone maker Xiaomi announced Wednesday it has sold 34.7 million smartphones in the first half of 2015, a 33 percent increase over last year.

Xiaomi CEO Lei Jun said last year that it has plans to sell 100 million smartphones in 2015, and while the current 35 million is shy of the halfway mark, the company has added new markets,such as Brazil, to easily catch up.

Brazil is the first market for Xiaomi outside of its stronghold of Asia, and reception from local fans have been pretty enthusiastic. Xiaomi had to host a second launch event right after the first to accommodate the hundreds of people stuck outside the theatre during the first session.

“It’s one of the craziest days of my life,” Hugo Barra, head of Xiaomi’s international business, said in an interview with CNET after the event.

Xiaomi’s strategy of targeting emerging markets (while avoiding the US and Europe) with its low-priced phones such as the Xiaomi Redmi 2 has so far proven successful. It has also been a boon for other Chinese brands, which have taken cues from the world’s most valuable startup to offer similar online flash sales and low-cost affordable handsets as well as heading to markets like India.

“Roughly 90 percent of Xiaomi’s volumes have been in China in the past, followed by India in a very distant second,” said Bryan Ma, IDC Asia’s vice president. “Sure, the US and Western Europe are important markets (especially in terms of influence), but in terms of numbers, these smartphone markets are each only just over 10 percent of the worldwide market right now. India, on the other hand, is expected to be larger than the US in unit terms by 2017.”

But the company isn’t just focused on the low-end market; Xiaomi also makes high-end devices such as its Mi Note and Mi 4i. Priced much lower than most flagship phones, these devices have been popular with consumers.

Xiaomi says it can offer such lower prices without comprising quality because its mostly cuts out the middle-man and sells direct to its users. Xiaomi says smartphones make up 70 percent of sales on its Mi.com site.