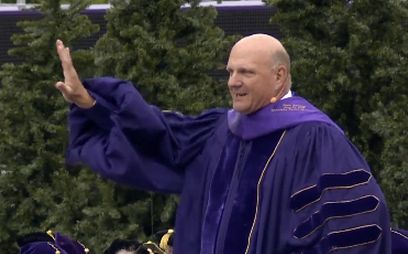 Editor’s Note: With the 2014 graduation season in full swing, Entrepreneur.com is bringing you full commencement addresses given by some of the world’s most inspiring leaders.

Back in February, Steve Ballmer stepped down as Microsoft’s chief executive after serving in that role for 14 years. For both Ballmer and the graduates he addressed at the University of Washington’s commencement ceremony, 2014 thus marks the end of an important chapter.

At one point during his characteristically excitable address, Ballmer turned to two students who had spoken earlier. “The two of you guys said you are respectively 22 and 30 and don’t what you’re doing [after graduation]?” said Ballmer. “I am 58 years old and I, too, don’t know what I’m doing again!”

In contrast to the crowd of fresh faces, however, Ballmer has been out in the world for some time, collecting accomplishments (under his leadership, Microsoft’s annual revenue grew from $25 billion to $70 billion, and net income increased 215 percent to $23 billion) as well as notable missteps (missing the boat on mobile).

From his war chest of hard-earned life experience, Ballmer crystallized three important lessons for the graduates.

1. Seize opportunities. The conventional wisdom may be that it’s a tough time to enter the workforce but for Ballmer, the class of 2014 “is graduating at perhaps the best time in history.” Why the extreme optimism? Emerging technologies, Ballmer believes, arm graduates with the necessary tools to change any industry they enter. “Opportunity! Opportunity! Opportunity!” Ballmer shouted. “It awaits you. It’s there for you.”

But opportunities can sit in front of you for a lifetime, dormant. “You’ve got to grab them,” Ballmer said, encouraging the graduates to embrace risk (hey, it worked for him: In 1980, Ballmer dropped out of Stanford Business School to work at Microsoft, then a tiny upstart). “Don’t be afraid to make a mistake, because you know what you can do if you grab the wrong one? Drop it and pick up another one!”

For lightning to strike, opportunity is rarely enough. Instead, a genuine breakthrough requires a distinctive perspective that can shape a generic opportunity into something extraordinary.

To illustrate this point, Ballmer pointed to Jack Dorsey, the co-founder of both Twitter and Square. “I barely know the guy, but I am in awe of his story,” he told the graduates, outlining how Dorsey, early in his career, wrote software for taxi dispatchers in St. Louis. The taxi drivers’ two main concerns – communicating with the dispatchers and getting paid – informed Dorsey’s point of view, ultimately inspiring him to develop Twitter and Square, Ballmer said. “A point of view creates opportunity.”

Ballmer recounted the pushback Microsoft received from more established players in its early days. “When Microsoft first decided it wanted to sell software into businesses, people told us we couldn’t,” Ballmer said, and despite repeated discouragement, the company never stopped pitching its software. “Today if you look at Microsoft’s enormous success, 70 or 80 percent of it comes from selling [software].”

Genuine success is rarely instantaneous, Ballmer has found: “Opportunity is about seizing what’s there. It is about having a point of view. But it’s also about patience and determination. Things will not necessarily come to you — ‘poof!’ — immediately and overnight. You’re going to have to be determined and long-term.”

To close, he reminded the graduates that life is all about seeking out new challenges. “The search for opportunity doesn’t stop,” he said. “It’s there in front of you at all times.”