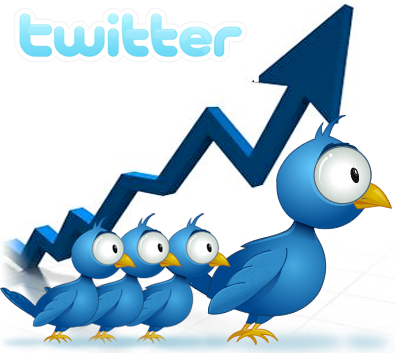 Although enjoyment on Twitter is not about the number of followers you have, there comes a time when your follower count is so close to a major milestone that you just want to beat that milestone with a stick. Whether its 100, 1000, or 10,000 followers, getting past a goal is always a nerve racking experience. The goal always seems so close, but yet so far. Having been through a number of milestones myself, here are some ways of getting past a milestone when you only need a few followers to reach your goal:

1) Follow people who have messaged within the last 10 minutes

It is important to find people who are currently on-line on Twitter. You will not quickly reach your goal if you follow someone who has not been on Twitter for 6 months. People that have recently tweeting are more likely to check their follower count and follow you back because they are on-line.

Many of the people that follow may also follow you as well. Currently I get about 200 new followers each day, and many are following back others on my lists so its a good idea to follow them as well. You can see my list under the follower’s link on the right hand side of the Twitter interface http://twitter.com/TwiterHero/followers

Do not use my following list because these people may not follow me back. Wait until they become followers.

Shout out lists are messages with @ names hat users generate to promote each other as a way of thanking each other for a mention. Sometimes these messages have tags of # S/O, S/O, #Shout, #shoutout or something similar. Sometime there is no symbol, just names. Do not overdo shout-outs though as excessive mention tweeting can cause account suspension. Only mention people you know.

Let others know that a friend is looking to break an upcoming realistic goal and that they could sure use some of your help with a follow. Working together, you will achieve your goals much easier than working alone. You will meet some very interesting people this way.

Also, asking someone to help you get thousands of followers is not a realistic goal.

I have set this blog up so that you can find some very interesting people. The first section allows you to add your own name to this blog with a widget form Tweet Counter. It scrolls names to visitors and allows them to follow directly from the widget. 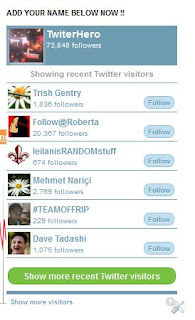 The second way to get followers through this blog is to look at my current timeline and click on @ names I am messaging. These people are on right now and could be interesting for you to get to know. 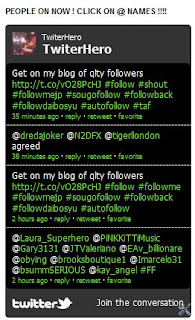 The third way to use this blog is to click on the user links shown on the right hand side. -
I frequently compile a list of all the people that have mentioned as a token of my appreciation to promote them in return. 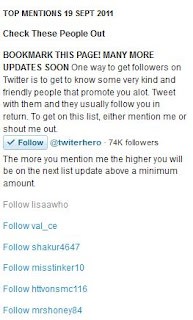 Also, enter your email address and add yourself at the bottom of this page to get notifications when updates occur.

Hashtag teams can also be useful in finding new people. There are many teams, and they evolve over time. You can find these by searching on a single hashtag or by clicking the hashtag and seeing other hash tags that appear in the timeline. Some popular hash tags currently seen in alphabetical order are:

In my opinion, there is no one best team. Some teams have higher follow-back percentage than others. #Teamfollowback, for instance, has a 30% follow-back rate, meaning you have to follow more than 3 people to get just 1 follow in return. Following too many people can quickly cause your account to exceed follower limits.

Beware of people that promise to follow-back. Sadly, not many follow back. Remember that the only thing guaranteed to follow you back is your shadow. And your reflection, that is, if you’re not all sparkly.

Excessively tweeting messages only with hashtags will cause users to unfollow you. They also want to see content.

Use the right hastag for the occasion. Using a hashtag just because it is popular does not work well. It merely wastes the limited number of tweets you can send each day.

8) Don’t ask someone to have their followers follow you.

Same applies to asking someone to retweet (RT) your name to your followers. These methods do not work. Period. Twitter is a free form society and asking or ‘telling’ people in your timeline this type of message does not go over well with users.

Never forget that it is your followers that have done you a favor in following you back. There is no ‘I’ in tweet, but there is ‘we’ . Be grateful. They went out of their way in clicking the follow button, something they did not have to do.

Make it worth someone’s while to be your follower. Respond with a follow back, message, interesting information, or a thank you. There is a higher value in social collateral if you get to know the person.

11) Not Everyone Will Follow You Back. Get Over It

A simple fact is that although some people will say they will follow you back and they won’t for whatever reason. Don’t let it bother you. Move on and you’ll meet other interesting people and you’ll be happy you did.

12) Take part in #followfriday (#FF) and other hashtag games

Follow Friday is a Twitter tradition where users acknowledge other users during the week. A message is sent sometimes with the #FF or #followfriday hashtag. Sending a #FF message is a great way to thank people for mentioning you during the past week. Remember that mentions are good publicity for your account. Not all #FF messages, though, contain active users so I only selectively follow people I see on the list or from people that I have had a reliably good experience.

I have met some amazing people through follow Fridays and the more followers I get, the more impressed I am with Twitter members.

Looking at your timeline will also show you hashtag games that people play. They are a lot of fun like #RoastFriday . People will follow you in these. Get involved, meet people, and have fun.

13) Set your Goal for a Friday through Sunday afternoon

These days are the heaviest use days for Twitter as it coincides with the International Date Line and you are more likely to get more followers on these days as a result.

I have found that many follow lists are outdated and many users are no longer on Twitter. The old names are of no value as many users drop off Twitter with-in 6 months. Only use current lists.

Twitter is a unique communications tool in our lifetime allowing instantaneous communications through-out the world. You get to meet people you would never have been able to meet before this medium. Don’t let meeting your goals take priority over the needs of your followers.

Also know that by tweeting you will attract followers. A quite account is hard to find.

16) Don’t flood the timelines of other users.

Flooding is when an account sends an excessive number of tweets during a certain time period. Excessively sending tweets will annoy other users causing them to stop following you. Respect the members of your timeline and you will not lose as many followers.

17) Know some users will stop following you.

Some users will stop following you with-out any indication or reason. Sometimes this can happen in as little as 24 hours. Do not take it personally. Don’t worry about it.

Do not think of Twitter like a registered, certified letter. I have had many messages get lost in delivery to and from me so don’t think that just because a message is sent, that it will make it to the receiver. If it is important and you do not get a reply, think about sending it again.

Many people use the twitter search functions and third party applications to find users who tweet specific words or phrases. The more you send messages, the more you will find yourself being followed. Some words such as “money”, “religon”, “work from home” and “band-aid” in a tweet stream will cause followers to appear.

Timelines like mine always have active people who will likely follow you back. Plus, the people on the timeline are active within the past 10 minutes so they are good people to follow.

Its nearly impossible to get ahead tweeting all people to follow back. Sometimes it is best to just follow that person first instead of spending the time to ask for a F4F ( follow for follow).

Lists can hold up to 500 people, and users can have up to 20 lists. At a minimum, that’s 10,000 possible unique referrals. Many people get followers off of lists, and you should too. Plus by listing someone, they may list you back thereby increasing your chances of getting more followers.

Many of the new names that appear in your mentions timeline are good people to follow. Afterall, they took the time to send a message specifically to you.Clicking on te lilnk of thier name opens a window on the right side that will show you wether they are following you. I find many new reciprocal followers this way.

I know I promised 15. Consider the rest a free bonus. Besides, fifteen sounds better. Tools like Tweet Counter have slide bars to predict how long it will take you to reach a milestone based on your average number of new followers a day, but if you’re like me, meeting the goal is a good feeling.
Remember not to add too many followers with these methods otherwise you could end up in Twitter Jail so limit using these methods unless you are close to your target goal. Best of luck in reaching your goals and maybe one day I’ll pass 100,000. Until then, Tweet On!